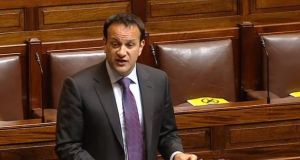 Taoiseach Leo Varadkar speaking in the Dáil on Thursday

Taoiseach Leo Varadkar said he stands over Ireland’s “slow and steady” reopening of the economy and also told the Dáil on Thursday the State can afford to borrow at low interest rates to help the economy recover from the severe shock it faced.

But he warned: “there is no such thing as free money” and debt has to serviced and interest repaid.

During the ongoing debate on the impact of the coronavirus crisis on the economy Mr Varadkar said “we do not need to be the best boys in the fiscal class” but” we should seek to a deficit similar to those of our peers in Northern Europe. Not much larger ones. This is a sensible sustainable thing to do.”

Substantial borrowing would be necessary to cushion the blow to society and there would be a substantial deficit this year.

“We will use this borrowed money to provide income support for those who’ve lost their jobs to get businesses open again, provide retraining and educational opportunities for our fellow citizens who are now without employment.”

He said the substantial blow to the economy has deep social consequences as well, including record breaking levels of unemployment and lower living standards for many.

“The cost of providing public services and infrastructure projects may rise, it might cost us more to do this.

“And many parts of our economy might never look quite the same. Again, for the better, but also for the worse.”

He said that “on the upside we have not been shut out of the money markets as we were 12 years ago” and Ireland retains the confidence of European institutions and capital markets.

The Government will borrow and “we should continue to do so”.

But warning that there was no such thing as free money he said debt had to be refinanced or rolled over when it matures.

He did not agree that debt should be left to “our children or grandchildren” in 10, 20 or 30 years.

The Taoiseach warned that “the world has changed so much in the last six months. It would be naive to think that it couldn’t change again and quickly if conditions do change the countries with the biggest deficits and the largest depths, will be the first to feel the wind.

“We need to make sure that isn’t us.”

Speaking on the reopening of the economy he said “we really won’t know until the first week of June” whether the easing of restrictions has had any impact.

He said “I know that some other countries are opening faster, but every country circumstances are different. We stand over the slow and steady approach.”

He also said work had begun for a possible second wave of the virus this winter, coinciding with the regular flu season. He said hundreds of lives could be saved this winter and every winter by a much greater uptake of the flu vaccine.

“This matters now, more than ever, ss we need to avoid a second wave of Covid-19, coming up at the same time as the flu season.”

He said: “It’s particularly important that uptake by healthcare workers is much better than in the past.”

“This pandemic teaches us, there is no excuse not to be vaccinated.”

The Taoiseach said that the transmission of coronavirus has effectively been suppressed in the community and there had been broad compliance with the changes.

Fianna Fáil leader Micheál Martin said however the decisions around what businesses were allowed to open and what ones must remain closed “simply makes no sense” and were unfair.

And in some cases it’s damaging the credibility of the overall restrictions.”

Mr Martin highlighted the distinction between hardware stores and homeware stores said said it was “foolish”.

He added that “there’s now no doubt whatsoever that stores which are allowed to open are actively trying to fill the gaps created by keeping other types of stores closed. From a competition perspective, there has been a clear unfairness there.”

The Cork South-Central TD said 85 per cent of people had told a HSE survey they would be willing to wear a facial covering in some situations if it was recommended. “So as we move forward I don’t think we have to fear complacency.”

But he warned there had to be clarity so that the proposed measures make sense.

“As with so many things it is uncertainty and inconsistency, which causes trouble. The division between, which shops are allowed to open, and those which must remain closed.”

He warned that the “five kilometre limit is for example, actually making it harder to sustain social distancing in areas with a higher population density.

“It does not appear to be part of the restrictions being used by other countries which are a similar stage in their response efforts. I don’t play golf, but I think you’re saying if you’re saying you can play golf on the one hand, but then you can’t really play golf if your golf course is six kilometres away I think that’s just, that’s the kind of stuff we just need to refine maybe to be more nuanced in how we do things.”

He also called for consultation with different sectors so that they could propose solutions, “which may not have occurred to officials but which would work in practice”.