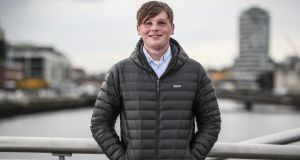 Young Scientist winner Shane Curran has raised $16 million (€14.5 million) from some of the biggest names in Silicon Valley investment for his data privacy technology company.

They include previous investors in tech giants such as Facebook, Deliveroo, Revolut and another Irish-led tech success, Intercom.

Mr Curran (20) founded Evervault less than two years ago. The company is building a ground-breaking data-privacy interface that developers can use when creating software. The idea is to ensure data is secured from the outset rather than being an afterthought.

Evervault has its origins in a BT Young Scientist and Technology Exhibition project, Qcrypt, which involved research in cryptography and data privacy. It won Mr Curran top prize in the 2017 competition.

The new funding round is led by Index Ventures, a leading London- and San Francisco-based venture-capital firm that has previously backed companies such as Facebook, Slack, Deliveroo, Dropbox, Revolut, Intercom, Just Eat and TransferWise.

Evervault is to use the new funding to continue to develop its technology, which is not currently publicly available. It also intends to take on additional staff.

“Today, data privacy is about trade-offs,” said Index principal Are Helgason. “Users give up personal information in exchange for apps and services that make their life easier, and regulators create rules that restrict data sharing as they attempt to protect consumers. This risks stifling innovation. The genius of Evervault is that it requires no trade-offs.”