Facebook puts revenues of €25.5bn through its Irish unit 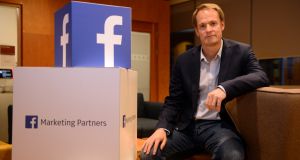 About €25.5 billion of Facebook’s global revenues last year were attributed to its main Irish unit, an increase of more than one-third over the previous year.

The social media giant also recorded a large spike in the profits attributed to its Irish subsidiary. Facebook Ireland’s profits before tax rose 43 per cent to €361.3 million, it announced, ahead of the publication of its full financial statements in the Companies Registration Office.

The Irish unit paid corporation tax of €63.2 million, it said. Facebook calculated its direct contribution to the Irish economy – which comprises wages, cash spent with local suppliers and capital expenditure – at €961 million.

Gareth Lambe, the head of Facebook Ireland, said the local unit, which constitutes its headquarters for its operations outside of the US, remains “important” for the group after a decade based in this country.

The mean average pay of staff directly employed in Dublin by Facebook cannot be ascertained until the publication of its full set of accounts, which the company said it was was unable to provide on Monday evening. But the corresponding figure for the prior year was about €154,000 for each staff member, including salary, bonuses and share payments, which underlined the behemoth’s position as one of the most lucrative businesses in which to work in the State.

The company, which is based in the so-called Silicon Docks area of the south inner city, is slated to move to a new headquarters in what was the AIB campus in Ballsbridge.

Including outside contractors, who are paid a fraction of the wages earned by direct employees, its workforce in the State totals well over 4,000 people.

1 Why are markets booming when a crash is on the way?
2 How much do Irish people earn? And what will Covid-19 do to our wages?
3 Government deficit balloons to €5.3bn on back of Covid spending
4 Drumcondra credit union collapses as merger plan fails
5 Could your old car be giving away all your secrets to its new owner?
Real news has value SUBSCRIBE