Amazon strikes back at Trump over $10bn defence contract 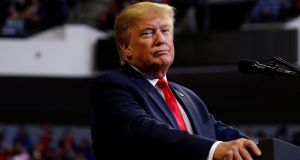 Amazon will appeal a decision to grant a $10 billion defence contract to its rival Microsoft, following accusations that Donald Trump manipulated the process. Photograph: Tom Brenner/Reuters

Amazon will appeal the Trump administration’s decision to grant a $10 billion (€9 billion) defence contract to its rival Microsoft, accusing the US government of having shown “unmistakable bias” in its procurement process.

The company said it was lodging a legal case against the decision, following accusations that Donald Trump manipulated the process to harm Jeff Bezos, Amazon’s founder.

The Pentagon awarded the so-called Jedi cloud computing contract to Microsoft last month after several rounds of bidding, a legal challenge from one of the bidders, and a last-minute intervention by the US president.

An Amazon spokesperson said in a statement: “AWS [Amazon’s cloud computing service] is uniquely experienced and qualified to provide the critical technology the US military needs, and remains committed to supporting the department of defence’s modernisation efforts.

“We also believe it’s critical for our country that the government and its elected leaders administer procurements objectively and in a manner that is free from political influence. Numerous aspects of the Jedi evaluation process contained clear deficiencies, errors, and unmistakable bias - and it’s important that these matters be examined and rectified.”

The Pentagon refused to comment on what it called “potential litigation”.

Four companies originally bid for the contract, which has been bitterly fought over as it would allow one company to handle much of the Pentagon’s data and communication systems.