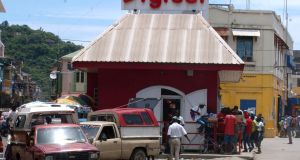 Fitch warned last week that Digicel faces ‘imminent refinancing risk’ and will likely have to restructure the 2021 bonds. Photograph: Getty

Denis O’Brien’s Digicel telecoms group saw its earnings dip in the three months to the end of September.

A slump in the value of currencies in some of its main markets against the US dollar offset an underlying improvement in revenues, according to sources. The company has operations in the Caribbean and Pacific islands.

While underlying revenues rose 4 per cent, they fell 1 per cent on a reported basis to $554 million, dragged down by a $26 million currencies hit.

This was mainly as a result of a weakening of the Haitian gourde against the US dollar, the currency in which Digicel reports financials and in which most of its $7 billion debt pile is denominated.

Digicel’s cash position declined, however, to $180 million from $214 million earlier this year. Still, its net debt ratio declined to 6.9 times Ebitda from 7.3 quarter on quarter, according to the sources.

The Digicel update, issued to bondholders on Monday, did not address how Digicel plans to go about refinancing $1.3 billion of bonds that mature in early 2021, which has become a growing issue for the company’s creditors and debt ratings firms.

Fitch warned last week that Digicel faces “imminent refinancing risk” and will likely have to restructure the 2021 bonds, which may, in turn, trigger a restructuring of a further $3.8 billion of debt that is due to mature between 2022 and 2024.

Earlier this year, the company managed to restructure $3 billion of debt by getting certain bondholders to postpone getting their money back by accepting longer-dated notes in exchange for their holdings. This was classified by ratings firms as a distressed debt exchange.

Meanwhile, the latest quarterly bondholder report showed that mobile data revenue rose 15 per cent as voice revenue within the same division continued to decline, according to sources. Data revenue of $233 million accounted for more than half of the mobile unit’s total for the reporting quarter.

Business solutions and home entertainment revenue also increased, they said. A spokesman for Digicel declined to comment on the figures.

Digicel, set up by Mr O’Brien in 2001, operates in 32 markets across the Caribbean, Central America and Pacific islands.

It has spent more than $5 billion developing its networks and business, which has 14 million subscribers, according to its website. Mr O’Brien took $1.1 billion of dividends out of the group between 2013 and 2015.