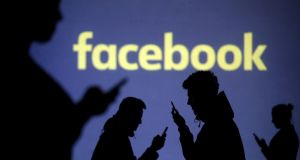 Facebook says its systems will be able to track foreign spending on ads, even when this is routed through Irish agencies. Photograph: Dado Ruvic/Illustration/File Photo

Facebook will no longer accept foreign advertisements relating to the upcoming referendum on the Eighth Amendment. The ban will apply to ads that have been paid for by organisations outside Ireland.

The move, which came into force on Tuesday, comes amid concerns that organisations and individuals based outside the country would try to influence the outcome of the referendum through Facebook ad campaigns.

Asked about this response after the announcement on Tuesday, a company spokeswoman said that “last week it was not possible to do that but this week we have new systems. The systems have changed.”

Facebook declined to be drawn on why it had made the change in its policy at this time. It also declined to supply any figures or estimates of the advertising spending by campaigning groups, or to confirm

there had been a big increase in such ads in recent weeks, as the campaign intensifies.

In its statement announcing the move, Facebook said “as part of our efforts to help protect the integrity of elections and referendums from undue influence, we will begin rejecting ads related to the referendum if they are being run by advertisers based outside of Ireland.”

The company said the “spirit” of its approach was “consistent with the Irish electoral law that prohibits campaigns from accepting foreign donations”.

The company declined to say why it had made the change, saying that it was a result of a “combination of things”.

The Facebook move was welcomed by groups campaigning for a Yes vote in the referendum.

However, No campaigners said it would make no difference to their online campaigning, though one senior source in the No campaign said it appeared the Facebook ban would be pretty easy for foreign groups to get around.

Observers say that the great majority of online ads relating to the referendum are advocating a No vote, and that there has been a surge in anti-abortion ads from overseas sources in the past week.

The Transparent Referendum Campaign, a voluntary group which monitors online ads and campaigns for transparency, welcomed the move, but said that what was needed was new laws to compel internet companies to reveal who was paying for ads.

Liz Carolan, co-founder of the Transparent Referendum Campaign, said that what was needed was “transparency and a rules based system around it.”

While many of the referendum ads are running on Facebook, they also have a significant presence on Google and Youtube.

A spokesman for Google, which also owns Youtube, said: “We require all political ads to comply with local election laws as well as our own policies on political content.”

However, when Google was asked if it was the company’s understanding that there were no local laws governing online political advertising, the company did not respond.