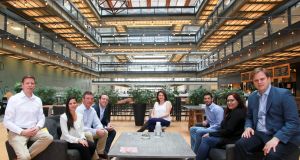 Ding chairman and founder Mark Roden is a former EY Entrepreneur of the Year winner, and previously teamed up with businessman Denis O’Brien to set up Esat Telecom in the early 1990s.

Dublin-based Ding, which was founded in 2006, enables expats to support family back home by facilitating the instant transfer of credit top-up to any mobile phone anywhere in the world.

The company connects users through more than 400 operators in over 130 countries. Headquartered in Dublin, it has regional offices in Miami, Barcelona, Bucharest, Dhaka, Dubai, Paris and San Salvador.

The company described the opening of the new office in New Jersey on Wednesday as “the latest step in the next phase of growth” for Ding, which had revenues of $500 million last year.

The company plans to scale up the business in 2018 and hire 50 new people.

Ding said its “extensive retail network” and relationships with key operators in the US would make it possible for the diaspora there to send top-ups to family and friends in Cuba, Mexico, Haiti, Jamaica and the Dominican Republic, among others, in seconds.

Ding chief executive David Shackleton said the business has moved into the “next phase of growth as demand for our product skyrockets”.

“Our new US office is going to help us to meet that demand on the ground, and help us to continue to serve our users among the Latin American, Caribbean, African & Asian expat communities in the US,” he said.

“Our new location in Bell Labs, which was the frontrunner in trying to achieve global connection, feels like a great fit for us.”

Bell Labs researchers completed the first transatlantic telephone cable connecting the US to Europe back in 1956, and also created the technology to make optical fibre practical, which in 1988 led to the laying of fibre optic cable across the Atlantic.