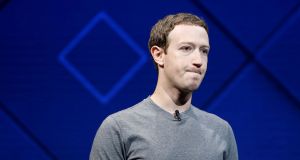 Facebook chief executive Mark Zuckerberg. The US company said it would press ahead with its bid to persuade the Supreme Court to hear an appeal over the referral to the ECJ of key issues around the transfer of data between the EU and the US.

Social media giant Facebook has failed to delay the referral of key issues around the transfer of data between the European Union and the United States to the European Court of Justice (ECJ).

Ms Justice Caroline Costello said the referral of the 11 questions to the European court from the High Court must now proceed “immediately”.

Facebook had sought the stay pending the outcome of its request to the Supreme Court to hear an appeal against Ms Justice Costello’s decision, delivered last October, to make the referral in the first place.

The US company said it would press ahead with its bid to persuade the Supreme Court to hear an appeal over the referral.

The High Court judge ruled that Facebook had no arguable case concerning whether an appeal court could overturn or vary a referral decision.

An earlier Supreme Court decision that an appellate court has no jurisdiction to overturn a referral decision is binding on her and Facebook’s arguments otherwise were “without merit” and “misplaced”, she said.

Dismissing Facebook’s argument that its interests would be prejudiced if a stay was refused, the judge said the existing delays had already “potentially gravely prejudiced” the Data Protection Commissioner (DPC), Austrian lawyer Max Schrems who made the initial complaint over his data transfers, and millions of data subjects throughout the European Economic Area, whose data continues to be processed under the disputed European Commission decisions approving EU-US data transfer channels.

The court shares the DPC’s concerns that data of millions of data subjects may continue to be processed unlawfully, she said.

She was critical of Facebook’s conduct of the litigation in relation to its intended reliance in any appeal on the coming into effect of the General Data Protection Regulation (GDPR) on May 25th and said that conduct weighed against even a limited stay.

The court would cause “the least injustice” by refusing a stay and directing the immediate delivery of the reference to the ECJ, she ruled.

Earlier, she noted as Facebook intended to advance arguments before the Supreme Court the referral was moot or pointless because of the GDPR coming into effect on May 25th.

The judge said Facebook had told her, on day 15 of the 21-day High Court hearing, that it was considering the fact the GDPR would come into effect on May 25th.

When she asked whether that went to mootness, counsel for Facebook had said that if there was to be a referral the GDPR would have come into effect by the time the matter was heard by the ECJ.

Counsel had also said the prospects were “not high” for any referral being decided before the replacement of the Data Protection Directive, the basis of the concerns whether there was adequate protection for data privacy rights of EU citizens.

That was the “sole discussion” on the GDPR point in the High Court case, she said.

If Facebook had wished to argue the reference would be moot because of the GDPR, that should have been done “explicitly and clearly” and not in that “oblique passing fashion”.

Facebook had not alerted the parties and the court this was a point on which it intended to place “such reliance”. The fact that the point was being raised only now gave rise to “considerable concern” as to Facebook’s conduct of the case and the manner in which it had dealt with the court.

Facebook had not alerted the court that, as far as Facebook was concerned, there was a “clock ticking down” which meant the case was not expedited so as to ensure the issues were not decided by passage of time.

Last month, having heard detailed arguments from the parties, Ms Justice Costello finalised 11 questions for determination by the ECJ. The questions raise significant issues of EU law with huge implications, including whether the High Court was correct in finding there was “mass indiscriminate processing” of data by US government agencies under the Prism and Upstream programmes authorised there.

Other questions concern whether the Privacy Shield decision and other measures in the US afford adequate protection for EU citizens whose data is transferred there.

On April 30th, Facebook’s lawyers indicated it was seeking a “leapfrog” appeal to the Supreme Court and sought a stay on the referral, made in proceedings by the DPC concerning a complaint by Mr Schrems that transfer of his personal Facebook data by Facebook Ireland to the US breached his data privacy rights as an EU citizen.

Ms Justice Costello agreed to refer after concurring with the commissioner that there were “well-founded” grounds for believing the EC decisions approving data transfer channels, known as standard contractual clauses, were invalid.