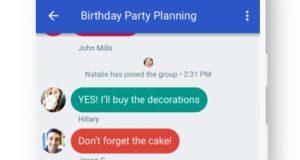 Google is developing Chat, which will have to be adopted on an operator-by-operator basis rather than as an update through the Play Store.

While iPhone users have been enjoying enhanced texting through iMessage since 2011, there is no universal Android equivalent with status reporting, ie the ability to know if you message has been sent, delivered, read, or to see when the recipient is texting back – and all while you are charged out of a data plan rather than per text message.

Yes, Android users can already message in this manner through Facebook Messenger or WhatsApp but surprisingly, the transition from SMS to what is known as RCS or rich communication services has been patchy and available on some networks or handsets while not on others.

Google is developing Chat, which is the RCS integration to the Android Messages app and will have to be adopted on an operator-by-operator basis rather than as an update through the Play Store. It will allow an iMessage-like service between those with Chat but standard SMS messaging to all other Android phones. Mashable reports that, to date, 55 carriers and 11 manufacturers alongside Google and Microsoft have already come on board.