Employees working remotely due to coronavirus may face online congestion 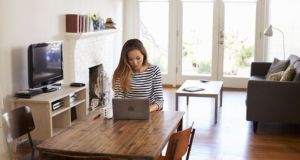 Experts are warning that office workers could swap traffic congestion for online congestion as more and more workers log in and swamp broadband networks. Photograph: iStock

Recruitment firm Indeed was first to do it. Google had a few days of it. Vodafone Ireland asked employees to transition a few days ago. As the coronavirus outbreak spreads, it seems everyone is turning to remote working as a potential solution to keep their businesses running should Covid-19 hit a little too close to home.

It seems like the ideal solution. Instead of trekking into the office every day, office workers can log into their systems remotely and keep the business ticking over. No commute each morning, no congestion to deal with; just a short hop to your desk and a lower risk of bumping into someone carrying Covid-19.

But experts in the United States are warning that office workers could swap traffic congestion for online congestion as more and more workers log in and swamp broadband networks. And in the United Kingdom, some experts have advised that Britain’s copper infrastructure may not be able to cope with added burden of remote working, virtual private networks and video conferencing.

Irish telecoms providers seem fairly confident their infrastructure will fare better. Virgin Media Ireland, which has about 378,200 broadband customers, said the coronavirus outbreak was a significant global challenge, but the company was “well prepared” both for its own workforce and its customers to work from home.

“Virgin Media places a priority on the health, safety and wellbeing of our workforce, customers and visitors,” a spokeswoman for Virgin Media said. “We have planned extensively and are well prepared to respond in a way that is both proportionate and responsible.”

Eir, which has more than 947,000 broadband subscribers and 730,000 fibre broadband connections, said its network would be able to stand the strain of extra home workers.

“There is ample capacity for all users of Eir’s network to work from home with confidence,” the company said. “Eir has invested €1.5 billion over five years in its network, including the upgrade and expansion of its high-speed, high-capacity fibre network around Ireland.”

Ireland’s networks have been tested in the past, with extreme weather events such as Storm Emma and the “Beast from the East” forcing many workers to stay home for several days. It is not clear though what would happen if a large number of workers were accessing broadband from various providers while others were using data-hungry services such as video streaming.

Not everyone has access to high-speed broadband, particularly in rural areas. That’s what the National Broadband Plan is expected to cover, but until then it may leave some companies stuck for workers.

Vodafone has been instrumental in creating a number of gigabit hubs in more rural areas of the State as part of a partnership with Siro. These include Skibbereen, Cavan, Drogheda and Sligo. The hubs deliver fibre optic cables to the building, providing a high-speed connection with no copper along the way to cause a bottleneck.

The initiative has now been rolled out to 15 hubs, and has enabled the growth of schemes such as Grow Remote, which supports remote working in towns around Ireland as an integral part of growing local communities.

Siro also covers some 300,000 homes and businesses in 45 towns around Ireland with fibre to the home (FTTH). “Because FTTH has no copper connection (which can cause congestion and slow speeds) it delivers a 1 Gigabit (1,000 Megabit) internet connection,” said Stephen O’Connor, director corporate affairs with Siro. taking care of all your entertainment, education and video conferencing needs. “Each SIRO circuit is capable of managing 400 times the average user speeds observed on the network to date so while we do expect to see increases in traffic (like we saw during the snow event in March 2018) the SIRO network is dimensioned to carry many multiples of current data traffic.”