US president Donald Trump has said he has not been tested for coronavirus, saying he has no symptoms of the disease and was examined by the White House physician. 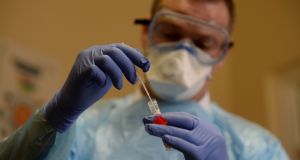 An increasingly locked down Italy has more than 12,000 coronavirus infections and recorded soaring deaths among its ageing population.

Capital city Rome has been transformed into a ghost town after Italy’s 62-million population was told to mostly stay at home.

The death toll in Italy from the outbreak of the novel coronavirus has jumped in the last 24 hours by 196 to 827, the Italian Civil Protection Agency said on Wednesday, the highest daily increase in deaths of any country since the outbreak began.

Among those who have died from the virus in the region is the head of the medical association in the northern city of Varese, 67-year-old Roberto Stella.

The total number of cases in Italy, the European country hardest hit by the virus, has now risen to 12,462 from a previous 10,149.

Amid the latest figures, prime minister Giuseppe Conte added new restrictions on Wednesday to the lockdown imposed to fight the coronavirus .

In a televised address to the nation, Mr Conte said all shops would be shuttered except supermarkets, food stores and chemists, and companies must close all their departments that are not essential to production.

Services such as hairdressers and beauty parlours will also be closed, along with all bars and restaurants.

The health crisis is already dealing a serious blow to the country’s economy – the third-largest of the 19 countries using the euro – and threatens instability worldwide.

The Italian government announced it is earmarking €25 billion to confront coronavirus, with the first spending commitments by the end of the week.

Economic minister Roberto Gualtieri said a decree expected by Friday will outline spending of about €12 billion, which will include measures to support health services and the civil protection agency and to support the labour market.

In Bulgaria, a 66-year-old woman became the first person to die of the coronavirus in the country, the Bulgarian health ministry said.

Belgium’s health ministry announced a first death related to the coronavirus, with health authorities saying the patient was a 90-year-old woman.

Sweden also reported its first death from the new coronavirus on Wednesday, with a hospital in Stockholm saying an elderly patient had died in intensive care.

Turkey confirmed its first case of Covid-19 on Wednesday, becoming the last major economy to report an outbreak.

Hungary has declared a nationwide state of emergency due to the spread of the coronavirus and banned the entry of people arriving from Italy, China, South Korea and Iran. So far, Hungary has 13 cases of the coronavirus, several of them Iranian students recently returned from their homeland.

Denmark has shut all schools and universities after a 10-fold rise in cases since Monday.

Meanhile, the first case of community transmission of coronavirus in Scotland has been confirmed by the country’s chief medical officer.

Markets across Asia have dropped despite Wall Street’s gains a day earlier. Investors seemed encouraged by promises by US president Donald Trump of a relief package to cushion economic pain from the outbreak. Governments around Asia and elsewhere have also announced billions of dollars in stimulus funds, including packages revealed in Japan and Australia.

European companies grappling with the impact of coronavirus could soon qualify for multimillion-euro loans backed by the EU and big banks in a scheme poised to get waved through in days, according to people familiar with the matter.

ECB president Christine Lagarde said Europe risks a major economic shock similar to the financial crisis of 2008 unless leaders act urgently on the coronavirus, and indicated the ECB will take steps as soon as this week.

For most, coronavirus causes only mild or moderate symptoms, such as a temperature and cough. But for a few, especially older adults and people with existing health problems, it can cause more severe illnesses, including pneumonia.

The virus has disrupted travel, closed schools and halted manufacturing in places around the globe.

India said on Wednesday it will suspend all tourist visas to the country in a wide-reaching attempt to prevent the spread of coronavirus, as cases across the region continued to rise.

Malta on Wednesday banned travel with Germany, France, Spain and Switzerland to try to prevent the spread of the coronavirus, prime minister Robert Abela said. The small Mediterranean island imposed similar restrictions on travel from Italy on Monday.

In the US the majority of the country’s 1,000 cases are being tied to a conference in Boston, and leaders in multiple states are announcing curbs on large events. Universities around the country are emptying their classrooms and moving to online instruction and uncertainty surrounds the upcoming opening of Major League Baseball.

New York’s governor Andrew Cuomo said National Guard troops would scrub public places and deliver food to a suburb where infections have spiked. In Washington state, where a Seattle-area nursing home was the centre of an outbreak, officials said the virus had spread to at least 10 other long-term care facilities. In California, thousands of restless passengers remained stuck on a cruise ship, waiting for their turn to disembark to begin quarantines.

It is all evidence of the continuing westward push of the virus. In China, where it first emerged, officials said they had counted only 24 new cases on Wednesday.

In a reversal of positions, China is seeing new cases brought in from overseas. In Beijing, the capital, all the new cases of Covid-19 reported on Wednesday came from outside the country, five from Italy and one from the US.

German chancellor Angela Merkel cited expert estimates that up to 70 per cent of the population could be infected by the new coronavirus as she insisted on the necessity of measures to slow its spread.

Germany had confirmed some 1,300 infections as of Wednesday, with two deaths. The government has recommended the cancellation of all events with more than 1,000 people, among other things.

Belgium introduced a series of preventive measures on Tuesday, including a recommendation to ban indoor gatherings of more than 1,000 people.

Schools remain open so far but the elderly and people with underlying health conditions are being urged to avoid public transportation.

Spain’s coronavirus cases have surpassed 2,000, with roughly half of them in the Madrid region, where two-thirds of the country’s virus deaths have occurred.

Its health ministry on Wednesday reported 2,002 cases nationally, up 363 from the previous day. Deaths reached 47, up 11 from Tuesday.

Beijing’s city government said all passengers arriving in the city from overseas, regardless of their points of departure, are now required to undergo a 14-day quarantine.

The order, which goes into immediate effect on Wednesday, is part of stepped-up measures to prevent the virus that was first detected in China from re-entering the country.

Iran’s senior vice-president and two other cabinet members have contracted coronavirus, a semi-official news agency reported on Wednesday, as the death toll in the Islamic Republic rose by 62 to 354.

Panama’s government has ordered the temporary closure of all schools, public and private, due to coronavirus concerns.

Honduras has confirmed the first two cases of the new coronavirus in the country.

Ivory Coast has confirmed its first case of coronavirus, a 45-year-old Ivorian man who had recently travelled to Italy, the health ministry said on Wednesday. – PA and other agencies