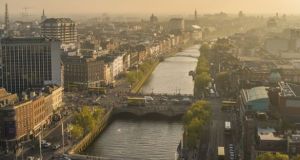 There are more than 1,000 tech companies in the State operating across a wide number of industries. Photograph: iStock

The State has a “vibrant” digital technology sector with more than 1,000 companies operating across a wide number of industries, according to new figures from Enterprise Ireland.

According to Enterprise Ireland, Irish digital technology companies had combined annual sales of more than €6.5 billion and exports of €3.6 billion in 2018.

The agency defines digital technology companies as those “developing and using tools, algorithms and applications to solve real-world problems across a wide range of industries that generate, store or process data”.

The new social media campaign has been launched to coincide with St Patrick’s Day and will be promoted in the three biggest markets for exports. Digital technology companies exported €1.3 billion to North America in 2018. In addition, exports to the UK and the euro zone totalled €900 million and almost €500 million respectively.

“There’s incredible energy and depth in the Irish tech scene. Accounting for €3.6 billion exports in 2018, the story behind the figures shows the strength of Irish technology companies and the impact they are making across the world, delivering innovation to global brands,” said Carol Gibbons, head of Enterprise Ireland’s ICT division.

“Exceptional talent, a vibrant investment activity and a renowned research base have combined to create one of the world’s leading tech hubs,” she added.

Enterprise Ireland was recently named the second-largest seed investor in the world and the biggest in Europe by the international investment platform PitchBook. It invested €24 million in 127 start-ups in 2019 and €72 million in venture funds in 2018, as part of its seed and venture capital schemes.