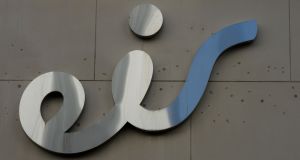 In recent weeks Eir has launched its 5G network in 10 towns and cities across Ireland. Photograph: Alan Betson

Revenue at telecom company Eir fell 3 per cent in the year to September 30th, while earnings rose 2 per cent year on year.

The company, which offers voice, broadband, TV and mobile services, said revenue fell €8 million to €304 million over the 12 months, as market competition, bundling and changes to regulated wholesale pricing changes hit the bottom line. The company said growth in data services and sport was offset by a reduction in access, voice and managed services revenue.

But earnings were €140 million for the year, a rise of €2 million compared with the previous period, and operating costs were down 11 per cent.

The company saw a rise in broadband customers of 20,000 year on year, bringing the total number to 945,000. That rise was driven mainly by wholesale customers.

The number of people subscribing to its TV product, Eir Vision, was down 3 per cent compared with last year, a fall of around 2,000 customers. Eir also has more than a million mobile customers, with more than half on post-pay plans.

Fibre to the home

“While Eir has been busy launching new services in recent weeks, we have also been busy with further successful refinancing transactions. Driven by favourable market conditions, we achieved a further €7 million saving on annual interest costs from our refinancing in October of €700 million of loans to two €350 million bonds, further improving our debt profile.”

“Our €1 billion investment programme is now bringing very visible benefits to our customers, with the very best in new digital technologies, at the very best prices,” said Carolan Lennon, Eir chief executive. “This is testament to the fact that, for the first time in 20 years, Eir is owned by a long-term telecoms investor, which has a long history of delivering consistent innovation, bringing huge benefits for customers across Europe.”