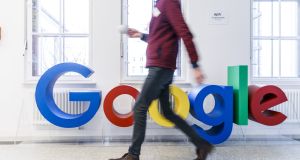 With the current account service, consumers will be able to receive their paychecks and transact solely inside the Google ecosystem. Photograph: Carsten Koall/Getty Images

Google is taking its deepest dive yet into the financial lives of its users with plans to roll out a current account service.

Citigroup and a California credit union are the tech giant’s initial partners for the venture, which will let users access their bank accounts through the Google Pay app beginning next year, according to sources. Other banks could join up later, the people said, asking not to be identified because the plans haven’t been announced.

“We’re exploring how we can partner with banks and credit unions in the US to offer smart checking accounts through Google Pay, helping their customers benefit from useful insights and budgeting tools,” Google said in an emailed statement, adding that the accounts will carry federally guaranteed insurance.

The move is the latest sign of Silicon Valley’s determination to muscle in on financial firms’ territory, looking to expand their hold on customers and accumulate data on their finances. At the same time, it shows banks are more willing to pair up with technology companies in their quest to avoid getting shut out of the relationship entirely. In the Google arrangement, the financial institutions will handle most of the compliance requirements.

Google has spent years building out its payments capabilities, offering consumers the ability to send money to friends and check out both online and in stores through Google Pay. With the checking accounts, consumers will be able to receive their paychecks and transact solely inside the Google ecosystem.

“We’re going to see more of this, but it’s not the death of banking,” Bryce VanDiver, a partner with Capco who advises banks and payment companies, said in a telephone interview. “Compliance is still being managed by Citi. If you look at banks’ core competencies, compliance being one of those, they’re really good at that.”

For Google, the trove of data associated with checking accounts and financial products is another step in its push to collect information on all aspects of consumers’ lives. The firm has a wealth of information on consumers’ search behaviour from its flagship site as well as partnerships with the largest US healthcare systems to analyse consumers’ health data. The move comes at a time when Google and other large tech companies are under increased scrutiny with antitrust in quiries around competition law.

“This is probably more about Google Pay and how they plan to position that going forward to access all financial products, not just credit cards,” Mr VanDiver said.

One of the people said Google partnered with Citigroup in part because the lender has spent the last year building out its digital banking arm, an effort that’s helped the bank gather more than $4 billion (€3.6 billion) in deposits this year.

“This agreement has the potential to expand the reach and breadth of our customer base while complementing our continued investments in digital,” Citigroup said in a statement.

The partnership is a bit of a shift for Citigroup, which has been relying on marketing its digital bank accounts to existing customers in the firm’s sprawling cards business. The New York-based company said earlier this month it would offer special perks for checking accounts to customers of its co-brand credit card with American Airlines Group.

“This year we’ve increased the deposits we’ve raised digitally more than fourfold,” Anand Selva, who leads Citigroup’s consumer bank in the US, said at an investor conference this month. “As we continue to test and learn and enhance our digital capabilities and experiences, the digital deposit momentum has accelerated through the year.”

For the finance industry, the worry is that tech giants could one day replicate the success of Alipay and WeChat Pay in China, where money flows through digital systems without the need for banks.

To fight off the threat, banks are striking deals to keep a firm hold on their customers. Apple paired with Goldman Sachs this year to offer a credit card that extended $10 billion (€9 billion) in credit lines as of September 30th. Uber Technologies Inc announced last month that it would offer a bank account to drivers on its platform through a partnership with Green Dot Corp.

1 Why are markets booming when a crash is on the way?
2 How much do Irish people earn? And what will Covid-19 do to our wages?
3 Drumcondra credit union collapses as merger plan fails
4 Government deficit balloons to €5.3bn on back of Covid spending
5 Could your old car be giving away all your secrets to its new owner?
Real news has value SUBSCRIBE