Convoy, whose other backers include Jeff Bezos and Bill Gates, now valued at $2.75bn 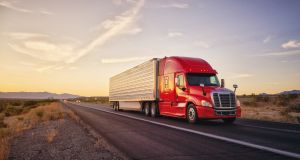 Convoy, the on-demand truck-tracking company backed by U2 frontman Bono and lead guitarist The Edge, has been valued at $2.75 billion (€2.49 billion) after raising a further $400 million.

This brings Convoy’s total capital secured by the company from investors to more than $668 million.

Based in Seattle, Convoy is a provider of on-demand shipment services designed to connect truck companies with freight shippers. It has been described in some quarters as an “Uber for trucking”.

Uber itself offers a similar service known as Uber Freight, while other rivals include KeepTruckin and Next Trucking.

Some $800 billion is spent annually on trucking services in the US, according to Convoy.

“Trucking has historically been a zero-sum game, born from a marketplace where when one side wins the other side loses. The magic of applying technology to this decades-old industry is that we can create a true win-win for both sides, lowering the total cost to shippers with better service, while removing the hassle of wasted time and miles for truck drivers, allowing them to earn more,” said co-founder and chief executive Dan Lewis.

“Building a more efficient digital freight network also means we can dramatically reduce carbon emissions associated with empty miles, which is good for the planet,” he added.

Bono and the Edge were announced as backers of the company in 2015 with Mr Lewis saying at the time that having spent most of their lives on the road touring, the Irish musicians knew a thing or two about trucks.

This is not the first tech investment made by Bono and The Edge. Bono previously co-founded private equity firm Elevation Partners which has backed both Facebook and Yelp. The two musicians have also invested in Dropbox, and in Irish start-up Nuritas, a highly regarded company that uses data mining of molecules in food and food by-products to identify supplements and new drugs.

1 Brother is dragging his heels as executor of uncle’s will - is there anything I can do?
2 Irish whiskey sales near milestone of 12m cases a year
3 Covid-19 mortgage breaks: What’s the catch?
4 Stocktake: Has Warren Buffett lost the magic touch?
5 Should my mam wait for house prices to drop before buying?
Real news has value SUBSCRIBE