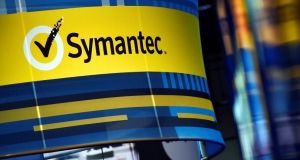 Interim dividends totalling a combined €366.6 million were paid out in the months following the end of the reporting period

The Irish subsidiary of security software giant Symantec recorded a huge surge in profits last year due to income gained after its parent acquired rival Blue Coat in a €4.7 billion deal in June 2016.

The local arm, which has seen employee numbers decline from almost 1,000 to 700 since 2015, recorded a €30 million jump in pretax profits while turnover also rose by a hefty €214 million.

Turnover for continuing operations rose 22 per cent to €1.2 billion.

The primary reason for the rise in revenues and profits is due to royalty income earned by the company’s acquisition of Blue Coat’s intellectual property. The company also benefited from €2.6 million in foreign exchanges gains compared to a €10 million loss from currency fluctuations in the prior year.

The unit’s net assets swelled by €1.7 billion due to the intellectual property income gain, which arose after the initial deal for Blue Coat and cost the company €2.1 billion.

Symantec Limited provides a range of content and network security software and appliance solutions to businesses and consumers. The latest accounts show it has forward foreign exchange contracts amounting to €140 million as of March 2017.

Interim dividends totalling a combined €366.6 million were paid out in the months following the end of the reporting period.