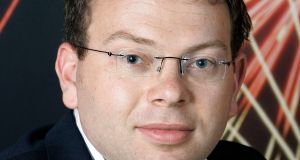 SuperAwesome, the London-based “kid tech” company established by Irish tech entrepreneur Dylan Collins, has been valued at $100 million after recording a profit for the first time.

The company, which is reportedly exploring a listing on the London Stock Exchange, reported its first profitable quarter at the tail-end of last year, according to a report published by the technology website Techcrunch.

That report, which was subsequently posted by Mr Collins on LinkedIn, said the company has reached a revenue run-rate of $28 million, after reporting 70 per cent growth year-on-year.

Founded by Mr Collins in 2012, SuperAwesome is a kid-safe marketing platform that operates as a bridge for brands to reach those aged between six and 16.

It includes a number of channels across physical, digital and mobile, including its “Instagram for Kids” app, PopJam. Partners include the likes of Lego, Mattel, Hasbro and Nintendo.

The company raised $21 million last year in an investment round led by Mayfair Equity Partners, bringing total funds raised to date to $28 million.

Mr Collins is considered one of Europe’s most experienced digital media entrepreneurs. Prior to establishing SuperAwesome, he founded DemonWare, which was acquired by Activision Blizzard, the video games giant behind the Call of Duty franchise. He was also behind Jolt Online Gaming which was bought by GameStop, the largest video games retailer in the world.

The entrepreneur is also a partner with the $40 million early stage technology VC fund, Hoxton Ventures and sits on the board of the Dublin-based animation studio, Brown Bag Films.