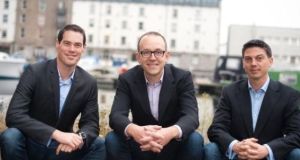 Irish travel tech firm Boxever recorded a 65 per cent jump in revenues in 2016, a period in which accumulated losses jumped to almost €14 million.

The Dublin-based company, which was founded by Dave O’Flanagan, Alan Giles and Dermot O’Connor in late 2011, last year confirmed plans to raise an additional €6 million in follow-on investment. The move came after it previously raised $19 million (€15.4 million) from investors that include Polaris Partners, Frontline Ventures and Silicon Valley Bank.

Newly-filed abridged accounts for Boxever, which has developed a big data and personalisation platform used primarily by airlines and travel operators, show losses rose from €7.8 million to €13.8 million last year.

The increase in losses comes as the company has looked to move beyond travel and into other sectors. It also follows on from a rise in staff numbers, resulting in a higher wage bill.

Boxever announced plans to take on an additional 100 people in early 2016 and by the end of that same year was employing 56 people, up from 38 in the previous reporting period.

A note included in the accounts reveals that revenues jumped 65 per cent year-on-year although no figures on turnover are outlined.

“Over the last six years, we have built a global client roster, including brands such as Emirates, Air New Zealand, eDreams Odigeo, Jetstar, Cebu Pacific, Viva Aerobus, Finnair, Aer Lingus and many more. We have now also expanded our core offering beyond the travel space, to include financial services, securing our first customers in 2017,” chief finance officer Laura Shesgreen told The Irish Times.

“Our strategy has always been to invest in a world-leading product and grow our customer base. We are able to leverage this upfront investment to reduce our losses year-on-year. Our product is transforming the way organisations interact with customers and we’re looking forward to another big year in 2018 in travel and beyond,” she added.