Did Paris Hilton invent the selfie? And what does it all mean?

Net Results: The yearning to self-immortalise must run deep in the human psyche 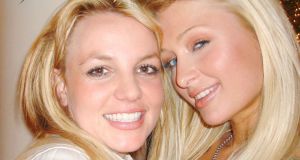 Is this the first selfie, taken by Paris Hilton in 2006?

In case you missed it, or perhaps studiously avoid any piece of news in which the words “Paris” and “Hilton” are conjoined, it is my solemn duty to inform you that said celebrity claimed in a Sunday tweet that she half-invented the selfie. In 2006, to be precise, when she took some pictures with her phone of herself and – no, guess?  – Britney Spears together.

Unfortunately there was no Twitter back then on which to post said selfies, as the microblogging site of choice for Russian trolls, white supremacists and bullying national leaders had yet to be invented. But what joy, we have Twitter now. And thus we are able to see the tweet and view the attached 2006 selfies of the blond twosome if we so wish.

Sadly the women failed to patent the concept. Imagine their joint riches today if for the past 11 years we had all been charged a selfie royalty for every image of us gurning away next to a friend, a pet, a famous location, an adult beverage, or, now and then, some poor waylaid celebrity forced to smile stiffly next to a total stranger.

But I jest. Needless to say the Hilton Twitter feed was immediately flooded with people disputing this notion of a 2006 debut for the selfie, much less that no one had ever thought of the idea before. Awkwardly, one of the first mentions of the word was in an Australian online forum in 2002. There goes the patent application.

Indeed, most of us older than 20 can likely produce some blurry photographic evidence that we too selfied prior to 2006.

Some may even remember the good old days of mobile camera lenses facing only one way: away from you. This meant many blindly-shot selfie attempts as you didn’t have the opportunity of seeing what you were shooting on the (tiny) screen. You just had to hope the angle was right to show more than just your left ear.

In a story that looked at Hilton’s claim as assiduously as the dubious content of a Trump tweet, the New York Times interviewed Mark Marino, a professor at the University of Southern California, who said a photo from 1839 is often cited as the first selfie, though the picture-taker ran to get into the shot. So the yearning to self-immortalise must run deep in the human psyche.

And guess what? There are lots of scholarly studies on the psychology of selfies, though they can’t seem to agree on what our selfie-addiction means.

And we do seem to be addicted. According to Statista. com, a US study indicated in February that 87 per cent of Americans aged 18-34 had taken a selfie and posted it to social media. To that one can only marvel at who the other 13 per cent are. Hermits?

Women apparently take more selfies than men, especially in Moscow, where 82 per cent of all selfies are snapped by women. In New York it’s a more modest 61 per cent.

Millennials, the prime selfie generation, take 55 per cent of social media selfies and are predicted to indulge in over 25,000 of them during their lifetime, about one a day, according to a study by Now Sourcing and Frames Direct. And apparently they spend an hour a week taking and editing them.

What do selfies mean? A study here says they reveal an innate narcissism in the selfie-taker. A study there says they are expressions of ourselves in which we try to show ourselves as we’d like to be seen.

An article last summer in Psychology Today claimed we use selfies to emphasise dominance or submission, depending on the angle from which we take them (low angle, dominance; high angle, submission and straight on, supportiveness).

I don’t know about all that. I think the only submission intended in most selfies taken from above is to force the double chin into retreat, deftly hidden under an upwardly tilted head.

Reporting in the journal Frontiers in Psychology, the Germans found  that while most of us enjoy taking selfies – 77 per cent of their study sample – the vast majority found other people’s selfies annoying. Some 82 per cent said they would rather see other posts on social media than people’s selfies.

In what researchers termed the “selfie paradox”, they noted that individuals perceive their own selfies as “authentic and self-ironic” while others’ selfies demonstrated “non-authenticity and narcissism”.

That Paris Hilton and Britney Spears, so self-centred and big-headed. Just look at those self-regarding 2006 faces in that tweet! And claiming they’d invented the selfie!

Whereas may I just share this flatteringly angled, but amusingly self-ironic selfie of me and one of my dogs? Wait! Come back!