Duleek in Co Meath has cameras covering the entire village as part of a community surveillance scheme, but is it a vital crime prevention tool or an invasion of privacy?

A scheme described as “the most advanced” CCTV system of its kind in Ireland went live in the Co Meath village of Duleek in July. Its 14 cameras monitor Duleek and neighbouring Donore, which have a combined population of just over 5,000. 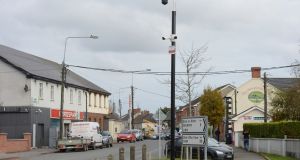 CCTV cameras installed in Duleek, Co Meath. “Blanket surveillance such as this has been struck down on several occasions by the European courts,” said local solicitor Fred Logue. Photograph: Alan Betson 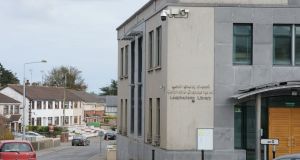 A dome-type camera over the library building in Duleek, Co Meath. Privacy advocates are concerned that the cameras, rather than prevent crime, contribute to breakdown of the community. Photograph: Alan Betson

Nearly four years ago, five cameras monitoring traffic going in and out of the town of Royston (population c.15,000) in the east of England were removed by police after the UK’s privacy regulator found the level of surveillance to be illegal.

Two automatic number plate recognition (ANPR) cameras remained active in the scheme, dubbed the “Royston ring of steel”, after the Information Commissioner’s Office said the original one was “unlawful” and “excessive”.

Following a complaint by a number of privacy campaign groups, the commissioner found Hertfordshire police had not undertaken any form of assessment before introducing the cameras to examine the impact on people’s privacy, or to consider whether it was a proportionate response to resolving crime in the area.

As the number of community-based CCTV schemes has begun to expand here, and as the technology grows increasingly sophisticated, the debate over their effectiveness as a tool against crime, as well as their impact on people’s privacy, is belatedly catching up.

Community CCTV schemes may be authorised by the Garda Commissioner for the “sole or primary purpose of securing public order and safety in public places by facilitating the deterrence, prevention, detection and prosecution of offences”. Some 55 schemes have been authorised to date, most of them funded with assistance from a Department of Justice community grant scheme.

To great local media fanfare in July, the first such community scheme in Co Meath went live in the neighbouring villages of Duleek and Donore, with a combined population of just over 5,000 people.

Garda Ray Andrews of the Duleek and District Text Alert group, which obtained the grant for the project, said at the launch the €50,000 system was “the most advanced and modern CCTV system in the country at the moment”.

Six dome cameras and five ANPR cameras complete with a recording system, accessible from both Ashbourne and Duleek Garda stations, cover Duleek village and roads in and out of it; three cameras cover the Donore area.

The monitors, according to Moran CCTV, which installed the system, provide “stunning views from virtually any angle”.

The scheme is unusual in that it was not funded by the Department of Justice, but was grant-aided by Meath County Council through an environmental levy on the Duleek-based incineration firm Indaver Ireland, known as the Carranstown Community Grant Scheme.

Local Independent councillor Sharon Keogan, who led the project for the text alert group, said the area had been “blighted by crime” and that this had been compounded by cutbacks in garda numbers and the lack of recruitment. The cameras would, she said, make Duleek a “no-go area for criminals from now on”.

But Charles Farrier of the No CCTV campaign group, one of the complainants against the Royston scheme, notes that far from just being used to detect criminals, modern cameras “can be linked to databases and algorithms that allow for tracking of entire populations”.

“These cameras store details of all cars that pass them and store them in a central database for two years (in the UK). No crime needs to be committed to be placed under surveillance; not even reasonable suspicion of involvement in any crime is required,” he says.

While not referring to the Duleek scheme, Farrier says the widespread introduction of CCTV is based “not on solid evidence but on half-truths and lies”.

“There is extensive research [much of it funded by the UK Home Office] that shows CCTV is not effective at dealing with crime,” he says.

“But I would go further than saying CCTV cameras are not effective at solving crime – this is too narrow a perspective. Surveillance cameras actually contribute to the breakdown of our communities. They do this by increasing fear, decreasing trust and undermining a sense of community.”

He notes the Garda Modernisation and Renewal Programme (MRP) published last year includes plans for “expansion of the automated number plate recognition [ANPR)]technology and its integration into the centralised storage system to allow for wider access and analysis”. 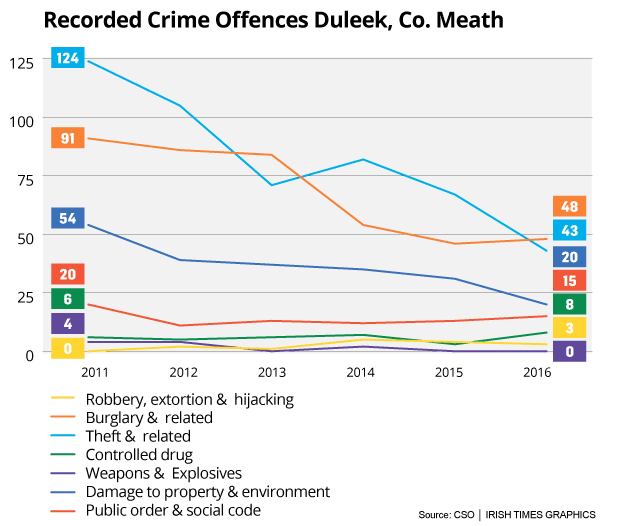 A Policing Authority document seen by The Irish Times say it is “not fully clear” what this CCTV project mentioned in the Garda renewal programme entails.

An Garda Síochána has, however, informed the authority that an internal committee is currently focused on four projects: the CCTV investigation process, centralised storage and analytics technology, live feeds and body-worn cameras.

A 2009 Garda policy document on the use of CCTV in public places says the proper use of CCTV in any community environment assists in the reduction of crime and the fear of crime, and with the detection of offenders.

“There are, however, many other legitimate uses not related to crime, which include traffic management, tracing missing persons, outbreaks of fire, protest marches, VIP visits, monitoring cash movements and drug enforcement,” it adds.

Adding that one should not assume that CCTV will solve all policing problems, it says the introduction of a CCTV scheme should be part of an “overall strategy in the fight against crime”.

The policy also acknowledges that such schemes “come with certain negative connotations, principal amongst them concerns that they result in unnecessary levels of surveillance and intrusion on the privacy of individuals and society – a so-called ‘Big Brother’ effect”.

A draft Policing Authority document prepared in September says it is “questionable whether the piecemeal system of Garda-operated and community-operated CCTV is the most efficient system of operating CCTV”.

“It could be suggested that this leads to variations in both the quality of the equipment and the resulting images but also creates greater opportunity for abuse,” the document says.

A shortage of gardaí is a clear issue. A policing committee meeting in Meath in October heard that garda numbers in what is a sprawling county in the Dublin commuter belt, currently at 313, are below the national per capita average.

Fred Logue, a solicitor who is familiar with the Duleek area and an expert in privacy and fundamental rights issues, said it was “concerning that small communities up and down the country are being asked to raise funds for CCTV systems that are in all likelihood illegal and ultimately will have to be dismantled”.

“Blanket surveillance such as this has been struck down on several occasions by the European courts,” he points out.

Local Garda Superintendent James Cannon said CCTV is recognised as being a very considerable tool in crime investigation and prevention. “We see the CCTV system in Duleek and Donore as being of enormous assistance in preventing and detecting crime in these two villages.”

According to Supt Cannon, the Duleek scheme has assisted in the investigation of a number of serious offences such as burglary and theft.

He said the data is retained for eight weeks and will be held by password protected servers based in Garda stations at Duleek and Ashbourne. Access to the data requires authorisation from the Superintendent or Inspector at Ashbourne. “We are fully aware of the need for compliance with Data Protection legislation,” he said.

Ms Keogan told a recent public meeting in Meath that a similar scheme was now being planned for the village of Julianstown.

A spokesman for the Data Protection Commissioner said the office had contacted An Garda Síochána in September 2017 “in relation to several queries concerning community CCTV schemes, namely their approval status and the use of ANPR”.

“On foot of the response received from An Garda Síochána, it is the intention of this office to examine the matters raised in detail within the next month as part of our periodic scheduled engagement with An Garda Síochána,” he said.

The Policing Authority said it had been advised the work on reviewing and revising the Garda policy and practice document on CCTV was at “an advanced stage” in July 2016.

In March last year, a family with a 15-month-old baby had a lucky escape after their Duleek pub was rammed with a van before the occupants torched the vehicle and set the premises alight.

At least a dozen people present escaped unharmed, but the pub and home were destroyed. It had been the second such attack on the pub.

Seamus Lowthe of Lowthe’s Londis in Duleek village says he has been robbed more than once and it is a very frightening experience. He says he’s probably no more likely to be robbed than any other shop owner, but he is happy with the CCTV system recently installed on the main street, and also operates his own.

About a year and a half ago, the shop was robbed by two people wearing “Scream” masks, one carrying a machete. Lowthe says someone subsequently came into the shop wearing a similar mask at Halloween and it was a terrifying reminder of the event.

“I have not really heard anything negative about them,” he says of the cameras. But as a business owner, he feels safer because of them. He admits they’re not going to stop every crime. But they might stop some, he feels.

In general, people on the streets and in homes and businesses around the village seem to be aware of the cameras but don’t show any major concern about their potential for use other than to deter or retrospectively catch criminals.

Michelle Lawless of Duleek and District Text Alert, the five-member group that applied for the grant for the hi-tech system, said it proposed installing CCTV because “there was a lot of crime around the area it wasn’t just around Duleek”.

“It was kind of everywhere. We were seeing that from doing the text alerts. There was a couple of incidents on the main street, there was antisocial behaviour, and as a group we had a meeting and we decided we would try and get CCTV for the village.”

“I don’t see why anybody would object to it because it’s only going to enhance the village in the sense that it will keep criminals out,” she says.

“Personally, as a citizen here in Duleek I can’t understand why anybody would have a problem with it unless they had intentions of being involved in criminal activity here.”