Should Government be dealing with O’Brien via Actavo with investigations taking place? 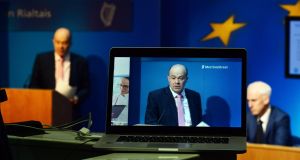 The Government’s broadband plans were mired in enough controversy before Denis O’Brien’s Actavo, formerly Siteserv, emerged this week as part of the final consortium left in the process.

The firm, which includes former Independent News and Media (INM) chairman Leslie Buckley as a board member, was named as a “key partner” to the bid led by US investor Granahan McCourt.

The fact that O’Brien and Buckley are both central to a major investigation into the alleged illegal mining of data from the servers of the State’s largest media group, and now find themselves among the consortium in pole position to scoop the Government’s biggest-ever communications contract, worth more than €1 billion, is an unexpected turn of events.

Mr Buckley has consistently said he would “fully and robustly” defend himself regarding the INM investigation.

The sale of Actavo by IBRC to O’Brien is also part of a separate investigation.

It’s more than just bad optics – there is another issue. Should the Government be dealing with O’Brien and Buckley via Actavo while the other investigations are taking place? There is, after all, a vitally important bit of State infrastructure at stake, one that has been continually promised since 2012, but which is now unlikely to arrive before 2020.

The absence of adequate broadband services in rural parts has become a major political issue for the Government. Not only does it underscore the two-tier nature of the Irish economy, it accelerates rural depopulation, issues that get a lot of airtime in Leinster House.

Relegated to a bit player

At the outset, it was led by Irish telco Enet, backed by Granahan McCourt. Then it was joined by Scottish utility SSE and logistics giant John Laing. But in July SSE pulled out while this week John Laing exited, and Enet now seems to have been relegated to a bit player. Would this chopping and changing be tolerated if there was a viable alternative?

The consortium’s latest iteration lists Actavo, Nokia, the Kelly Group and the KN Group as “key partners”. But the suspicion is the latter are not actually consortium members with skin in the game but merely suppliers included to make up for the high-profile exits for SSE and John Laing. Granahan McCourt declined to provide details of how its consortium was structured.

A key question is why did two blue chip UK plcs exit what was effectively a one-horse race with a fat Government cheque at the end? Did they baulk at the terms of the Government contract or did they fall out with David McCourt, the outspoken founder and chairman of Granahan McCourt?

Either way, it must be worrying for Minister for Communications Denis Naughten that Eir, ESB-Vodafone joint venture Siro, SSE and now John Laing – a sizeable chunk of the industry here and in the UK – have all looked at the project and said ‘no thanks’.

And that the Government’s seminal communications strategy, the one to bring rural Ireland into the 21st century, now hangs on the whim of a US investment firm, ostensibly a financial rather than an industry player. Surely this was not what the Government envisaged at the outset.

Typically financial investors such as McCourt work to shorter investment horizons and tend to be more focused on the financial engineering of the project rather the technical side of things.

Add to this the State’s poor experience of telecoms investment in the past: Eir has been flipped several times since privatisation by venture capitalists looking for a quick buck and starved of investment, an issue that is ironically at the heart of why we’re having this process in the first place.

“A trade player is more likely to have a long-term horizon that is more suitable to building the right infrastructure for years to come as opposed to coming out with the right answer financially in the short term,” an industry insider told The Irish Times.

Despite these concerns, Naughten appeared genuinely excited when informing the Dáil on Tuesday that his department had received the final tender from Granahan McCourt. It has, after all, been a long road, one that has taken six years and three ministers.

Asked by Fianna Fáil TD Timmy Dooley whether John Laing were still involved in the process, he didn’t comment. “It’s evident that the character of the remaining bidder has changed dramatically since SSE pulled out of the bidding process in July,” Dooley says. “It raises serious questions whether the consortium has the ability and expertise to deliver on the National Broadband Plan [NBP]. Someone has a big judgment call to make.”

McCourt, who recently bought a home in Co Clare, estimates he has invested more than $100 million (€85 million) in telecommunications in Ireland, primarily through his company’s acquisition and expansion of Enet.

He made his fortune from the sale of his US phone company, Corporate Communications Network, to WorldCom for $14 billion in the 1980s. Worldcom later went bankrupt.

Commenting on his company’s submission of the tender, he said: “We have assembled a world-class team with financial resources, unrivalled construction expertise and proven experience of operational capabilities to deliver this project for the Irish Government and for the citizens in rural Ireland. ”

“Granahan McCourt’s team has world-leading experience in designing, building and deploying large-scale telecoms infrastructure to the value of over $30 billion,” he said.

Doubtless that was a figure Denis Naughten would have mentioned when playing up the company’s firepower to fellow Cabinet members.

That said, he didn’t have much choice as with one horse left in the race the Government cannot be picky and must align itself to the only bidder left or pull the plug and face a political controversy that could conceivably topple it.

Why so many telcos have departed from Government’s project is difficult to weigh up without seeing the contract but it may come down to the market risk involved in investing in rural broadband here.

While the cost of building the network is forecastable, roughly €2,000 per home or business, equating to a little over €1 billion for the 540,000 homes and businesses covered by the plan, the future operating costs, which are heavily predicated on the uptake of contracts, are not.

Eir and Siro are building fibre networks in rural towns and villages across the country, but typically only get 20-30 per cent of the population passed by their networks opting in. In remote areas, where the roll-out costs are even higher, the uptake may be lower.

Defending her company’s decision to exit the process, Eir boss Carolan Lennon told an Oireachtas committee this week that investing in telecoms infrastructure in Ireland was an extremely tricky business, noting that 42 per cent of Irish people lived in rural areas compared to an EU average of 27 per cent.

“This reality, coupled with the geography of our environment, poses an enormous challenge to Eir in making the business case for further fibre network investment in more remote areas where costs would be prohibitive,” she said.

Equally, the Government may have included some onerous clauses to cap future revenues accruing to the winning bidder and/or limiting future share disposals to protect the taxpayer, mindful of the private windfalls that have been made on the back of previous telco sales.

Eir’s clever strategy of doughnutting towns and villages in the Government’s intervention area with its own technology means Granahan McCourt, presuming it wins, will have to traverse Eir’s infrastructure to get at the NBP homes, paying a handsome rent to the former semi-State in the process.

At €20 a pole, this could cost €20 million a year or €400 million over the contract’s lifetime, which will hike up the cost to the taxpayer. This was originally flagged as a major stumbling block with the Government pushing Eir to lower its access price, which is regulated by ComReg, but this issue seems to have receded.

However, it has become increasingly clear that the Government should have opted for some sort of State ownership model as a matter of social necessity, rather than leaving it to the private sector to weigh up whether its players can make the project commercially viable with a State subsidy.

The overall price of the scheme – estimated at between €1 billion and €1.5 billion – seems to have ballooned since the tender process began. This is because most of quasi-commercial part of the original scheme was removed at the last minute and controversially placed in Eir’s commercial rollout.

The project will involve laying more than 110,000km of fibre-optic cable, in many cases across remote and difficult terrain, a logistical nightmare thanks to the Republic’s patchwork of one-off housing and dodgy planning.

The Minister believes we have passed a milestone with the submission of a final tender this week, but doubts remain over where this process is going. And it seems – despite claims to the contrary – there is no plan B.