IPhone Xs review: A bit of bling and the screen is great 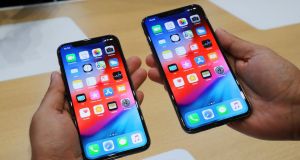 Apple’s latest iPhones, the Xs and Xs Max, go on sale in Ireland on Friday, with the iPhone Xr going on sale next month. So what’s all the fuss about? Here’s my first impressions of Apple’s iPhone Xs Max.

If you like your phones with a bit of bling, you’ll be pleased to see that the iPhone Xs brings back the gold version that was absent from last year’s lineup. Aside from that, the Xs essentially looks the same as the iPhone X. It has the same steel band around the edge and the glass back as the iPhone X, with the vertical camera set up on the back.

The iPhone Xs Max, obviously, has the size difference. But with the edge to edge screen, it comes in at a smaller overall size than the Plus versions of the iPhone 6,7 and 8. Your hands will thank you.

The biggest change to the IPhone Xs Max is the screen. It’s been increased to 6.5 inches, with the iPhone Xs sticking with the 5.8 inch display. That size means you may be a two-handed phone user again, particularly if you have smaller hands (and I do) but it’s a small sacrifice when you consider the extra screen you are getting as a trade-off.

There’s the notch to deal with at the top of the screen, but it’s something you get used to quickly.

It’s not just about size though. The iPhone Xs screen is incredibly detailed with vivid colours. It’s HDR10 compatible, a technology that gives brighter and richer colours, and also supports Dolby Vision. Putting it through its paces, the display dealt well with fast moving action, and it looked excellent throughout.

Smartphones are becoming increasingly competitive on the camera. It’s one of the main selling points for customers when they are choosing their phones, and Apple has stepped up its game on that front. It didn’t opt for the triple camera that Huawei went for for its latest flagship phone, but it has made some changes to make sure it grabs as much light as possible. The end result? Stunning photographs. I’ve never quite been able to recreate the results that the “shot on iPhone” campaigns seem to deliver, but so far, the camera is impressive.

I’ll need to do a side by side comparison with the Samsung Galaxy S9+ and the Huawei P20 Pro to see which camera comes out on top for low light photos – the P20 Pro is hard to beat – but the iPhone Xs has certainly upped its game here.

The front facing camera now has image stabilisation, which means smoother video, and the ability to change the bokeh effect on portraits afterwards.

There are few things more frustrating than a phone that looks great but stutters and runs slow as soon as you ask it to do anything more than the basics. The iPhone Xs has the updated A12 bionic chip, which gives a performance boost to the phone that means it will run even the most taxing video games and it will look as if there is a small console in the palm of your hand. A quick demo of Bethesda’s Blades looked stunning on the Xs Max.

Battery wise, Apple says the Xs Max should last up to an hour and a half longer than the iPhone X. I haven’t been able to test that fully yet – that will be dealt with in the full review coming soon – but so far, the phone hasn’t given me any cause for concern.