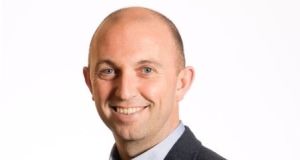 Fenergo chief executive Marc Murphy: “We’re looking at one or two acquisitions on a weekly basis”

Irish fintech company Fenergo is to take on an extra 300 people before the end of next March to bring total headcount to about 1,000 as it moves into new sectors.

The company has invested €30 million back into the business as it looks to expand into new segments such as asset and wealth management.

The move comes as the fast-growing company announced a doubling of revenues for the second year in succession, and as it rebounded from a €2.4 million pretax loss to record a €2.6 million profit gain.

“Ultimately our approach is about mutualising the cost to be compliant and so regulators and banks love us. Between that and the digital transformation journeys that financial institutions are on, it means our technology is in demand,” chief executive Marc Murphy told The Irish Times.

He said an increasing proportion of group revenues are coming from recurring software fees.

“We’ve emerged as the market leader in the client lifestyle management space for financial institutions, and are now looking to go beyond this,” said Mr Murphy.

“We’ve built our reputation in the corporate and institutional banking space. However, a number of our clients told us they want to bring our solution into commercial, business and retail banking, so we’ve launched teams in those areas and also added an asset management and private banking division.”

Mr Murphy said Fenergo, which added more than 200 employees to its workforce over the last year to bring headcount to 700, said employee numbers should hit the 1,000 before the end of its next financial year. “We’re building a multinational in our home town and that is something I’m extremely proud of.”

Looking ahead, Mr Murphy forecast another strong year for the company.

“We continue to go great guns, and are expecting another high-growth year in FY19. We’re tracking large double-digit growth for the first half of that, and will likely be up 50 per cent versus the same six months last year.”

“We’ve great backers especially with Insight, who have a big cheque book and recently closed a $6.5 billion fund so have plenty of firepower to put to work and they are always encouraging us to grow faster and acquire businesses, so I’ve no shortage of funding,” said Mr Murphy.

“We’re looking at one or two acquisitions on a weekly basis. I guess we are in the phase where we haven’t fallen in love yet, but we’re definitely looking to do so.”

1 How can I view my dead brother’s will if I’m not the executor?
2 Investors pile into property as turnover in build-to-rent sector reaches €2.54bn
3 Provisional liquidator appointed to Dublin engineering firm
4 Glencore to shake up its top tier with younger leaders
5 Mount Charles wins €10m catering contract at Maynooth University
Real news has value SUBSCRIBE