Samsung Galaxy Tab S4: might break the bank, but not your nose

Review: It’s sleek and light – handy if you drop it on your face. But the price is a bit steep 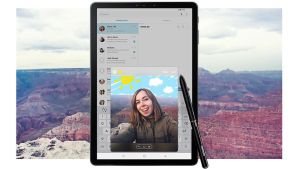 When it comes to tablets, there are a few things I like to see. First, a decent screen, one that I can still see in strong sunlight. Travelling abroad is when my tablet gets the most use, because it does double duty for playing videos and reading magazines. Second is a good battery life, so I don’t have to worry about recharging it every night. And third, it needs to be lightweight. Not so insubstantial that it feels flimsy, but, when I inevitably drop it on my face while reading a book lying down, I’d like to avoid a broken nose.

The Samsung Galaxy Tab S4 is one of those devices that can easily move between being a work and entertainment device, in the same vein as the iPad Pro. It has its own stylus, which reacts to pressure, and it’s included in the box rather than an extra. That gives Samsung a slight edge going into any head-to-head with Apple, but these things aren’t just down to the cost of extras.

The display on the Tab S4 measures 10.5in, and the whole package weighs in at 482g. Overall, it’s slim and sleek, and you can’t really fault it on looks.

Samsung talks about minimised bezels on the Tab S4, and, while it’s certainly a lot less wasted space than before, there is still a bit of bezel that could be slimmed down to make it a more edge-to-edge display. But it’s a minor nitpick on an otherwise great display.

The Tab S4 passes the sunlight test, remaining readable even in bright sunlight. And when it came to watching video, the quality of the screen stood up to even the most testing clips.

On the audio side, Samsung has included support for Dolby Atmos, and the Tab S4 bears the AKG logo.

Even with heavy use, the battery on the Tab S4 lasted a decent amount of time. It certainly wasn’t an automatic nightly recharge. Officially, it’s 16 hours of playback; in reality it meant two days of reading by the pool and still some battery power to spare.

The other selling point of the Tab S4 is that it has Samsung’s Dex technology built in. That means, like the Note 9, you can simply use a HDMI adapter to connect your tablet to a monitor and it will adapt to the large screen display with ease. It’s like carrying a small computer with you everywhere you go. I didn’t have much use for this, but on the occasions that I do need a larger display, having the technology built in and accessible with minimal accessories is a bonus. It wasn’t a perfect experience, though, and it seems there are still some kinks to work out.

But despite this, Dex makes the Tab S4 a more realistic proposition as a work tool. The second thing that won me over was the inclusion of the S Pen in the box. It functions in a similar way to the Note’s S Pen, giving you quick access to the S Pen menu. Using Samsung Notes, the installed note-taking app on the device, you can scribble away to your heart’s content, or doodle whatever comes into your head. The interface wasn’t as intuitive, though, as touching the screen with your finger could also produce pen strokes, which was frustrating when scrolling down the page.

The good: Light enough to carry around without it causing too much of a burden, the Tab S4 has a great screen and good sound, despite the small speakers. And yes, I dropped it on my face. Nose: unscathed, though the size of the tablet meant it gave me a nice smack across the bridge of my nose.

The not-so-good: Where the Tab S4 may stumble is in price. The device is aimed at the iPad Pro market, but considering there is a cheaper iPad that will also work with the Apple Pencil – and the whole package comes in less expensive than the Tab S4 – the price may be a bit steep for some. Still, for an Android tablet that pulls double duty, the Tab S4 is possibly one of the best I’ve looked at in the past few months.

The rest: The inclusion of the S Pen is a nice touch, although a case for the tablet might be more useful. The Tab S4 looks like one drop would leave some serious marks on its sleek casing.