Sports company has 500 clients including many leading European football clubs 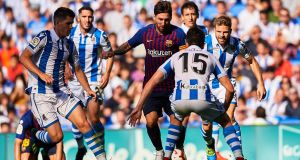 Newry-based sports tech firm StatSports is to create 237 new jobs over the next three years as part of “aggressive growth plans”.

The company won a contract in April to supply its monitoring devices to the Brazil national soccer team. That move came just weeks after it won a £1 billion deal with the US Soccer Federation.

Recruitment is well under way in Newry, with 92 of the new roles already in place. The jobs include a range of roles in sports science, sales, research and development, finance and marketing and human resources.

As well as job creation, StatSports is making a multimillion pound investment in research and development and staff training, supported by a grant of almost £4 million from Invest Northern Ireland.

StatSports recently launched its Apex Athlete Series. The Apex device is worn in a vest and positioned between the shoulder blades. It measures and analyses physical attributes of players and can provide feedback on metrics such as distance and speed, as well as levels of fatigue and injury risk.

Statsports, which was founded by Alan Clarke and Sean O’Connor in 2007, has 500 clients including leading European soccer clubs Arsenal, Manchester City, Manchester United, Barcelona and Juventus.

Its monitoring devices are also used by the Irish Rugby Football Union and all four Irish rugby provinces, as well as teams playing across GAA, American football, hockey and basketball.

“This is a hugely exciting time for us at StatSports as we embark on the next stage of our journey,” said chief executive Mr Clarke.

“We have already established our performance monitoring technology with some of the biggest and best-known sporting organisations in the world. This investment will allow us to expand our reach even further in both the elite and everyday field sports sector.

“Our staff are highly skilled and incredibly knowledgeable about the sports performance monitoring industry and we will be replicating that with the additional hires. The research and development assistance will also allow us to keep evolving our cutting-edge technology.”

“StatSports is an award-winning tech business that has a fast-growing reach across the world and an outstanding reputation as a leading pioneer of cutting-edge sport technology,” secretary of state for Northern Ireland Karen Bradley said.