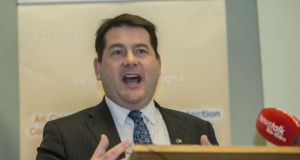 Minister for Data Protection Dara Murphy: there is no indication that London is emerging as a possible rival to Ireland for US technology companies.

Minister for Data Protection Dara Murphy has said he is reassured that the EU’s data privacy concerns will continue to be recognised by the new US administration following signals that President Donald Trump could move to undermine the data protection laws governing EU-US data flows.

Speaking in Washington following a meeting with the chairwoman of the US Federal Trade Commissioner Maureen Ohlhausen, Mr Murphy said he had had a positive meeting with the US’s most senior official in the field of data regulation.

US president Donald Trump signed an executive order just days into his presidency directing agencies to “exclude persons who are not United States citizens or lawful permanent residents from the protections of the Privacy Act regarding personally identifiable information”. The move, announced as part of Trump’s clampdown on immigration and prioritisation of national security concerns, sparked concerns that the new administration could try to unwind the EU-US privacy shield, which obliges US companies to protect European citizens’ personal data.

The EU commissioner with responsibility for data protection, Vera Jourava, met with the Trump administration in Washington last month. A review of the Privacy Shield has now been scheduled for September.

Ireland, as the European headquarters of most of America’s major tech companies, has found itself at the centre of the transatlantic battle over data. It will also effectively be the main regulator for most of the US tech companies operating in Europe once a new EU data directive comes into force next year.

Mr Murphy, who was speaking at the Global Privacy Summit in Washington DC about Ireland’s role in the transatlantic data economy, said he had made clear the concerns of EU citizens and outlined the changing, evolving nature of the data protection regime to Ms Olhausen. “On the foot of my meeting I am significantly less worried. I think [there is] a very strong understanding that the trade crosses the Atlantic in both directions,” he said. “There was a very good understanding that there had to be a very robust, well-supported mechanism for the treatment of EU citizens’ data here in America.”

Mr Murphy hosted about a dozen major US tech companies with a presence in Ireland at a lunch on Wednesday, during which issues around Brexit and the current regulatory environment were discussed.

It follows a similar set of meetings in Seattle and San Francisco in January when the Minister met with current and prospective US tech companies interested in investing in Ireland.

He said there had been no indication that London was emerging as a possible rival to Ireland for US technology companies, noting that Britain’s Information Commissioner’s Office had indicated that Britain is likely to mirror EU data rules following Brexit.

“The very strong sentiment and expressed opinion from all the companies I have spoken to here, and on the west coast in January, is that they are absolutely committed to staying in Ireland. Of course Britain will remain a very important market for these companies, so I don’t think we will see large tech companies completely removing themselves from the British market but what we are saying to them is that we can give regulatory certainty, currency certainty and single market access that is not up for question.”

Mr Murphy said that this week’s announcement by the White House that it is to examine the US H1B visa scheme which allows non-US tech employees to work in the United States had not been mentioned during his discussion with the US tech companies.