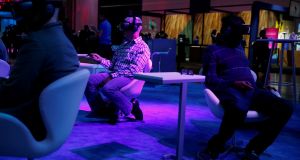 Facebook is trying to seize on the technology known as augmented reality, a mix of the real and digital worlds best known from the hit smartphone game Pokemon Go, chief executive Mark Zuckerberg said on Tuesday.

Speaking at F8, the company’s annual conference for software developers, Zuckerberg said Facebook was an obvious hub for businesses to reach people and experiment with augmented reality, although he did not suggest the company was planning to make similar games itself.

Pokemon Go, jointly developed by Nintendo and Niantic, has generated masses of followers around the world as players use their phones to capture animated characters that appear in real locations.

Other uses of augmented reality have included the ability to hang out with a hologram of Mad Men star Jon Hamm or assemble a virtual human brain, all on mobile devices. A recent push by Facebook to add camera features to its suite of smartphone apps will help the company popularise similar features, Zuckerberg said.

“Even if we were a little slow to add cameras to all our apps, I’m confident that now we’re going to push this augmented reality platform forward,” he said.

For a company that began as a way for college students to see pictures of each other, Facebook’s move toward augmented reality represents another step in its long evolution. It also raises the stakes for its competition with rival Snap, the maker of Snapchat that describes itself as a camera company. Zuckerberg said people could use the technology to leave a virtual note for a friend at a bar, or to find virtual street art on a wall that in real life is blank.

“This isn’t just about finding a Pokemon in a one-block radius,” he said.

Eventually, he said, people would use augmented reality on eyewear, although he did not give any details about possible Facebook hardware.

In 2014, Facebook acquired its Oculus virtual reality goggles unit for $2 billion, although that division is a long way from making a mass-market product or contributing significantly to the company’s earnings. As part of his conference address, Zuckerberg addressed shortcomings on another major project, Facebook’s push into video. He said the service needed to do more to prevent the spread of violent videos, such as one on Sunday of a fatal shooting in Cleveland in the US that was visible on the site for two hours.

1 Flight attendent seeks High Court injunction against Aer Lingus
2 Coronavirus: Irish holding back on holiday plans
3 Coronavirus: ‘All bets are off’, says aircraft industry chief
4 Tax burden on Irish households among lowest in EU
5 Bank leaked my loan request to family who tried to rip me off
Real news has value SUBSCRIBE