Firm preparing to launch its flagship apps in Australia, take on more staff in Dublin 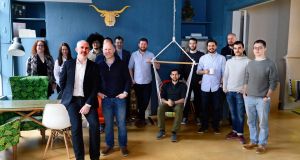 Irish fintech start-up Rubicoin has successfully secured a further €1.4 million in a new funding round to take its total amount raised to date to more than €5 million.

The company, whose backers include Enterprise Ireland and American investment advice group the Motley Fool, was co-founded by Emmet Savage and John Tyrrell in 2013. The Dublin-based firm, which raised $2.2 million (€2.05 million) when it launched its flagship Invest app in the US in late 2015, secured an additional €1.2 million last year. It also operates in Canada and is to launch shortly in Australia.

Speaking to The Irish Times, the company founders said the latest funding round, which includes investment from new and existing investors, is still open but will likely close soon.

“Since December we’ve raised €1.4 million based on some very successful metrics that show we have grown the business through every lens possible. The round is still ongoing and we have a few more possible investors that are close,” said Savage.

Invest, which has been ranked as the number one investment app in Apple’s US AppStore for the past year, is an app for IoS and Android that makes it easy for people to start investing from their smartphones by giving straightforward instructions on how to buy shares and clear choices on what shares to buy. The company also has a second app called Learn, that helps wannabe investors understand the stock market.

“We don’t advise what shares people should buy. What we do is handpick a tiny percentage of the 7,000 listed businesses in the US based on a methodology that has proven over time to outperform the S&P500 by about 25 per cent,” said Savage.

Rubicoin last month surpassed the half-million user mark, of which 20 per cent are monthly active users. Their premium subscription service, which costs €6.99 per month, provides access to additional stocks.“We’ve seen a five-fold increase in engaged users since January and there were 70,000 new users for the Learn app last month alone,” said Savage.

Rubicoin, which currently employs 13 full-time staff, expects to take on additional employees in the coming year as it continues to roll out its app worldwide.

“The ultimate plan is to build an AI-driven roboinvesting system that is better than anything else you’ll see. We’ve commenced the design already but it won’t be launched until it can successfully replicate the things that make humans better than machines at the moment,” said Savage.

Mr Tyrell said the company has its sights on the UK but that it would have to reinvent its apps to focus on the London-based FTSE index rather than US stocks, which likely means it will be the tail-end of 2018 before it enters the market.

It has also translated its apps into Spanish and at some point intends to turn them into Mandarin as well.

While Rubicoin is looking outside of Ireland for growth, the company is intent on keeping its base in Dublin.

“I disagree with the view that Dublin isn’t a place to successfully build a business. We are and will be an international company with offices around the world but that doesn’t mean we won’t still call here home,” said Tyrell. His business partner, who has previously been included in Irish America magazine’s prestigious “Wall Street 50” list, agrees.

“We are out to create a global brand and nothing is going to stand in our way. Our mission is to get the world investing by making the process engaging, beautiful and fun. That’s a big ambition for a company which is only three-years-old but that’s our aim,” said Savage.

Lockdown frustration; forestry lobbyists; and Davy’s biggest crisis in decades 06:38
Major foreign retailers express frustration at length of Irish shutdown 06:05
Women hold 30% of director roles at top Iseq companies 06:00
Job creation is not the be all and end all 06:00
We need a mindset shift to build an outdoors fun economy for summer 06:00