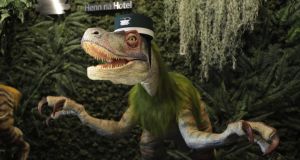 The receptionist at our Tokyo hotel is a little intimidating. Though polite, he growls our room number through razor-sharp teeth and leers at us with beady yellow eyes.

My five-year-old son slinks away in fear: dinosaurs are usually found in museums, not behind counters. Luckily, I tell him, this one is mechanical.

The Henn-na Hotel is Japan’s latest robot wheeze. Nine types of bots whirr and clack away throughout the building, from the Tyrannosaurus at reception to the silicon fish that swim in a tank in the lobby and the egg-shaped concierge, Tapia, in each of the 100 rooms.

The voice-activated Tapia controls the TV and air conditioning, and says goodnight as the lights dim.

A slightly pricey novelty – the rooms cost nearly 20,000 yen, or about €175, a night, twice the rate of a standard business hotel – Henn-na nevertheless raises a serious question.

Intelligent machines have replaced most manufacturing jobs in Japan, the world’s top exporter of industrial robots. Will they do the same in services?

Japan’s workforce has shrunk by about two million since peaking, in the late 1990s. The government says it could collapse by 25 million by midcentury as the population ages and shrinks.

With little immigration and full employment, Japan is pressing women, the elderly and machines into service to fill this labour gap, putting the country at the vanguard of changes that will soon sweep the developed world.

“Many hotels will eventually look like this,” Tatsuki Miura, a manager at the robot hotel, predicts.

Perhaps, but while check-in at the hotel is automated – a machine dispenses key cards for rooms – seven human staff are still needed to watch over customers and to avoid glitches – and theft, as a single Tapia robot costs about €850 a pop.

Japan’s army of engineers have for years been grappling with such service tasks, but humanoid robots are still little more than gimmicky toys, according to Tim Hornyak, author of Loving the Machine: The Art and Science of Japanese Robots. “Japan has taken the lead in humanoids, but what are they good for? Not much,” he says.

The latest entry in a long list of robotic fads is Pepper, Softbank’s diminutive plastic biped, which has taken up residence in thousands of restaurants, shops and reception areas across Japan.

Pepper’s line of chirpy interactive patter is triggered when customers file past a built-in sensor, but once the novelty wears off he is mostly ignored.

The greying workforce and the prospect that Japan could lose more competitive ground worries the government.

A report last year by the ministry of economy, trade and industry frets that, although Japan’s craftsmanship and engineering skills are second to none, it lags in development of software and artificial intelligence, the driver of intelligent robotics.

“Japan will be isolated from the rest of the world in the field of robotics,” it warns.

In response it has launched the Robots for Everyone project, which calls for “new ideas for utilizing robots in the service field, including department stores, beauty salons, hotels, and restaurants.”

So far it is unclear whether this initiative will deliver the goods, but for some people the future has already arrived.

Earlier this year, 34 workers at a Japanese insurance firm were told they would be replaced with artificial intelligence.

The AI system reads medical records and information about hospital stays to calculate policyholders’ payouts, and does it faster and more cheaply than humans.

That’s just the start, the World Economic Forum predicts. Robots and new technology will displace more than five million jobs in Japan and the world’s other leading economies by 2020, it said last year.

Nomura Research Institute, a Japanese think tank, says half of Japan’s working population could be replaced by robots or AI within the next 10 to 20 years.

The most vulnerable workers, according to the Nomura report, are those whose jobs involve systematic, repetitive tasks, such as train drivers, security guards and, yes, hotel receptionists.

Creative types, such as journalists, surgeons and designers, have less to fear, it appears.

Driverless trains and cars are already well past the experimental stage. A driverless taxi service is planned in time for the Tokyo Olympics, in 2020.

A test last year saw residents around Fujisawa, a coastal area southwest of the capital, order a robot taxi on their smartphones for a journey to the shops.

Across Tokyo people once classed as pensioners drive taxis, serve in supermarkets and guard banks.

That won’t last forever, according to Ken Ogata, president of Koreisha, a dispatch company that employs only the over-60s.

After all, he says, laughing, death comes to us all. Like many Japanese, he cannot see the nation opening up to millions of immigrants, either.

“So we face a choice: downsize our economy or use more machines.”

Ironically, one of the areas where robotics in Japan is making strides is in care for the elderly and infirm.

This month the car giant Toyota showed off a robotic leg brace that helps stroke and accident victims to walk.

Panasonic, which once manufactured many of the world’s video recorders, is among several companies making products for care homes.

Resyone, a robotic device that fuses an electric bed with a reclining wheelchair, helps care workers transfer their elderly charges from one to the other without doing themselves an injury.

Those machines will become increasingly important. One solution to Japan’s chronic shortage of nursing care is to encourage able-bodied elderly people to help out, McKinsey, the consulting company, says.

If 10 per cent of the over-60s were to take up such work the country would have an additional 700,000 carers by 2025, McKinsey calculates. But they will need robotic helpers for the heavy lifting.

The question, says Hornyak, is whether Japan can innovate fast enough to develop robots outside the factory.

“At the moment there are too many gimmicky robots that can entertain and not enough that can meet real needs in the labour market.”

Still, he says, a nation that has already automated so much, and that is designing a generation of robots to work alongside humans, cannot be easily written off.

“I’m hopeful that Japan will live up to its potential.”

One day, perhaps, that jerky mechanical Tyrannosaurus in the hotel reception will look as obsolete as dinosaurs themselves.