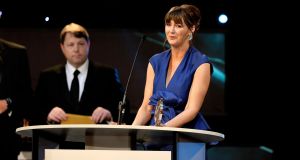 Triona Mullane of Madme Technologies and winner in the emerging category at the EY Entrepreneur of the Year awards. Photograph: Maxwells

Triona Mullane, the founder and chief executive of customer experience platform Madme Technologies, has won top prize in the emerging category at the EY Entrepreneur of the Year awards.

The company, which has customers across the world including in India where its software is enabled on more than 200 million phones, works on an annually-recurring licence model, helping mobile operators including Denis O’Brien’s Digicel, Reliance Jio and Celcom communicate with customers on their mobile device.

Ms Mullane, formerly chief technology officer of NewBay Software, a company acquired for $100 million (€89 million) in 2011 by Canadian smartphone maker Research in Motion which subsequently became Blackberry, founded Madme in 2013. She also sat as a non-executive director on the board of Independent News & Media (INM) prior to its sale to Mediahuis earlier this year.

“Triona is a very worthy winner in what was a very competitive category this year,” said Jenny Melia of Enterprise Ireland and one of this year’s judges.

“Triona has built a great management team and her courage, ambition, resilience and leadership are key to the company’s international success in a challenging and demanding sector,” Ms Melia added.

Ms Mullane said the award represents a fantastic validation of what she has done so far.

“It’s about perseverance. Nights like this and getting an accolade like this, particularly given the company I’m in with the other 24 finalists, it’s an amazing thing to be singled out.”

The other finalists in the emerging category this year were: John Mullins of Amarenco Solar; Tom Cronin of Rye River Brewing Company; Mervyn O’Callaghan and Simon Murray of CameraMatics; Sonia Deasy of Pestle and Mortar; Alex Kelly and Ian Nolan of Brightflag; Timothy and James McElroy of HouseMyDog; and Mark Dowds of Trov.