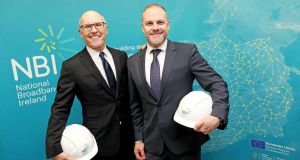 Some 300 towns and villages across Ireland are to get high-speed internet hubs while they await the arrival of the National Broadband Plan (NBP), the company in charge of rolling out the €3 billion scheme has confirmed.

National Broadband Ireland (NBI), the consortium led by US investment firm Granahan McCourt, said it will deploy “broadband connection points”, where the public can get free high-speed internet access, across the country from the second quarter of next year.

(If you are reading this article on The Irish Times app, click here to see our interactive location map).

The measure is intended as a stop-gap for communities with the worst broadband coverage, he said.

Mr Hendrick was speaking after the company and the Government signed the contract to deliver the NBP, marking an end to a five-year long procurement process, which has been dogged with controversy.

Taoiseach Leo Varadkar hailed it as the “biggest investment in rural Ireland ever” and said the project was the “most important since rural electrification”. “Twenty-first century Ireland is not about reopening post offices,” the Taoiseach said.

Mr Hendrick said the plan, which involves the laying of up to 140,000km of fibre-optic cable, would “future-proof” the State’s broadband needs for the next 30 to 40 years.

Surveying and design teams will start work in early January in the first locations, which include Carrigaline in Co Cork, parts of Connemara in west Galway, and several towns in Kilkenny and Limerick.

Up to 15,000 homes and businesses in these areas will be connected by the third and fourth quarters of next year. Under the terms of the contract, NBI has to be deploying fibre in at least seven counties by end of the next year and all counties by 2021.

The scheme, which could cost the taxpayer as much as €3 billion in subsidies, is expected to take up to seven years to complete, although the majority of homes will be “passed” or have access to the new network within the first three years.

The final 5 per cent of premises, which are located in the most remote areas, will get a wireless connection initially, but Mr Hendrick said the intention is “to get fibre to everyone who wants it”.

NBI will operate the new network on a wholesale basis, charging broadband providers €100 connection fee per premises plus a monthly rental. The cost to the end user will at the discretion of the retail operator, but Mr Hendrick said the prices should be no different to non-NBP areas.

NBI has been engaged with retail service providers over the past 12 months, with more than 40 of these attending information briefings, he said.

NBI has signed seven key subcontracts, including with KN Group, Kelly Group, 4Site, Nokia and Denis O’Brien’s Actavo, which will be responsible for rolling out the fibre network.

An additional 35 contracts to do with software development, marketing, branding, communications will be signed by the end of next year.

NBI is investing €220 million in equity and working capital in the plan, a fraction of the Government’s potential €3 billion subsidy, the State will not own the network at the end of the lifespan of the contract, which has been a source of controversy.

Mr Hendrick said NBI was paying for the initial design and build out. “So all of that construction risk we’re taking upfront and we only receive subsidies upon delivery of the network,” he said.

“There’s quite a regimented certification process with the Department of Communications in verifying that activity has been delivered,” he added, noting the company is also shouldering the risk of a low take-up.

NBI had also agreed to extend the contract for an additional 10 years to 35 years without any additional cost.

The company currently employs 60 people but is planning to expand its workforce to 220 and to move its head office from Merrion Square in Dublin to a location in west Dublin, outside the M50 motorway, by the end of next year.

Around 650 people will be employed directly and indirectly over the first 12 months of the NBP, Mr Hendrick said.

“We can’t wait to get out on the ground, delivering this essential utility across large tranches of Ireland that currently have no access to reliable high speed broadband. It will be a game-changer.”