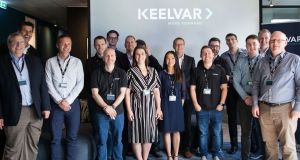 Keelvar, a Cork-based company that uses artificial intelligence (AI) to transform how suppliers engage with large enterprises, has raised $18 million (€16m) in funding to support its expansion plans.

Founded by chief executive Alan Holland in 2012, the company has developed automation and optimisation software for use in enterprise procurement. It uses AI-enabled sourcing bots to automate buying processes.

Mr Holland is a former lecturer in AI at UCC’s computer sciences department, where he specialised in optimisation, game theory and algorithmic mechanism design.

He said that with Covid-19 having disrupted supply chains globally, the requirement for sourcing automation is expected to increase dramatically as organisations adapt to the changing economic landscape.

“As a key enabler for automation in procurement, we’ve experienced tremendous growth in the past year, and we see that continuing at an even faster pace given the current situation. This investment will allow us to build greater capacity to deal with this surge in demand for Keelvar’s software,” said Mr Holland.

The financing is to be used to support the company’s continued expansion in Europe and the US, as well as increased investment in the company’s core technologies and solutions.

“The future of work in procurement is changing quickly, with Covid-19 acting as a catalyst. We have witnessed an escalation in demand from enterprises seeking intelligent systems to automate complex processes as teams became overburdened with disrupted supply chains. Keelvar has proven that sourcing bots can relieve that burden enormously. Now it’s time to hit the accelerator and scale up,” said Mr Holland.

Keelvar intends to increase headcount, and is currently recruiting for a number of roles across engineering, AI/machine learning, product development, professional services, design, and sales and marketing.

Headquartered in Cork, the company also has offices in Dublin, Dallas, Pittsburgh, London and Berlin.

Partners Elephant and Mosaic led the Series A round with participation from Paua Ventures. Outlining why it backed Keelvar, Peter Fallon, a partner at Elephant, said the potential for digital procurement was enormous, with companies spending trillions of dollars annually buying from third-party suppliers.

He said Keelvar was well positioned to capitalise on a surging global procurement software market, which is currently growing at a compound annual growth rate of 9.1 per cent, and is expected to reach $7.3 billion by 2022.

“Keelvar’s sourcing optimisation and automation software delivers meaningful return on investment to enterprise sourcing and procurement organisations globally. We are excited to partner with Alan Holland and the team at Keelvar as the company continues to emerge as a leader in this market,” said Mr Fallon.

Elephant Partners is a Boston-based venture capital firm established by Andrew Hunt, one of the founders of popular US online prescription glasses brand Warby Parker.

Mosaic is a London-based VC, whose founders led early investments in companies including Alibaba, Etsy, Indiegogo, Pinterest and TransferWise. Its current portfolio includes Convoy, the truck-tracking company whose backers include Jeff Bezos, Bill Gates and U2’s Bono and The Edge.

Paua Ventures is a Berlin-based VC, which has previously backed Stripe and Pipedrive among others.

1 If international visitors are pariahs why are we not testing them on arrival here?
2 Varadkar to meet banks in row over interest on mortgage payment breaks
3 Can Grafton Street stop the flood of closures?
4 Belgium helps Ireland to a Brexit boon
5 ‘My rent here is so low it’s a joke’
Real news has value SUBSCRIBE