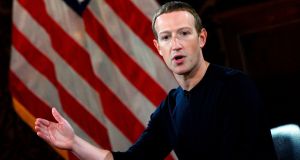 Facebook founder Mark Zuckerberg has defended his decision not to interfere with posts by US president Donald Trump. File photograph: Andrew Caballero-Reynolds/AFP via Getty Images

Facebook chief executive Mark Zuckerberg told employees on Tuesday that he stood by his decision not to challenge inflammatory posts on the platform by US president Donald Trump, refusing to give ground a day after staff members staged a rare public protest.

A group of Facebook employees – nearly all of them working at home due to the coronavirus pandemic – walked off the job on Monday. They complained the company should have acted against Mr Trump’s posts containing the phrase “when the looting starts, the shooting starts”.

Mr Zuckerberg told employees on a video chat that Facebook had conducted a thorough review and was right to leave the posts unchallenged, a company spokeswoman said.

She said Mr Zuckerberg also acknowledged the decision had upset many employees and said the company was looking into “non-binary” options beyond either leaving up such posts or taking them down.

On Friday, Twitter affixed a warning label to a tweet from Mr Trump about the widespread protests in the US over the death of a black man in Minnesota, a tweet that included the phrase “when the looting starts, the shooting starts”.

Twitter said the post violated its rules against glorifying violence but was left up as a public interest exception, with reduced options for interactions and distribution.

Facebook declined to act on the same message, and Mr Zuckerberg sought to distance his company from the fight between the president and Twitter. He maintained that while he found Mr Trump’s remarks “deeply offensive”, they did not violate company policy against incitements to violence.

Twitter last week also put a fact-checking label on two Trump tweets containing misleading claims about mail-in ballots. Facebook, which exempts politicians’ posts from its programme with third-party fact-checkers, took no action on a similar post from the president on its platform.

Timothy Aveni, a junior software engineer on Facebook’s team dedicated to fighting misinformation, announced his resignation in protest over the company’s recent handling of posts by Mr Trump.

“Mark always told us that he would draw the line at speech that calls for violence. He showed us on Friday that this was a lie. Facebook will keep moving the goalposts every time Trump escalates, finding excuse after excuse not to act,” he wrote in a Facebook post.

Civil rights leaders who attended an hour-long video call on Monday night with Mr Zuckerberg and other top Facebook executives called the chief executive’s defence of the hands-off approach to Mr Trump “incomprehensible”.

“He did not demonstrate understanding of historic or modern-day voter suppression and he refuses to acknowledge how Facebook is facilitating Trump’s call for violence against protesters,” said a joint statement from leaders of The Leadership Conference on Civil and Human Rights, the NAACP Legal Defence and Educational Fund and Colour of Change.

Some critics posted calls on Twitter for Facebook’s independent oversight board to weigh in. But the board will not review any cases until early autumn, and users initially will only be able to appeal to the board about removed content, not content that Facebook has decided to leave untouched. The board, which can overrule Mr Zuckerberg, will only review a small slice of content decisions.