Worker taken away by ambulance after displaying flu-like symptoms 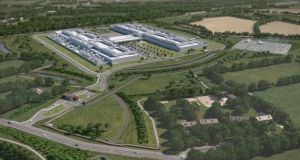 Three contractors working on the construction of new buildings at Facebook’s data centre in Clonee, Co Meath have been sent for tests after displaying flu-like symptoms.

One individual was taken away from the construction site by ambulance, while the other two were tested on site and are self-isolating. A canteen on the site has been closed for deep cleaning .

Workers at the site, including subcontractors, have been told they can stay at home if feeling unwell and will still receive full pay.

A spokeswoman for Facebook confirmed three workers had left the site. She said the decision had been taken as a precaution with no confirmed cases of Covid-19, the illness caused by the coronavirus that has been spreading worldwide.

“There are no confirmed cases of Covid-19 at the Clonee data centre. Three employees who are working on construction at the data centre reported having flu-like symptoms and are being tested for Covid-19,” the spokeswoman said.

Facebook last year confirmed plans to almost double the size of its data centre in Co Meath to 1.6 million sq ft, with the construction of two new buildings.

Facebook employs about 5,000 people in the Republic, including more than 2,500 directly.