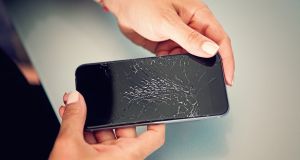 iPhones were the most common device insured in the Central Bank’s survey. Photograph: iStock

A majority of consumers don’t understand what is covered under gadget insurance plans and in most cases think it covers more than it does, research from the Central Bank of Ireland has found.

The examination of consumers attitudes when buying gadget insurance for items like smartphones and tablets found that consumers aren’t on top of what their cover offers them and in some cases, may be paying for cover they don’t need.

Some 29 per cent of those surveyed were unaware of the requirement to report theft/loss of gadgets to the gardaí while 45 per cent expected wear and tear to be covered.

The report is particularly significant considering almost 8 in 10 Irish adults own a smartphone, while 54 per cent own a tablet. Of the total adult population in Ireland, 12 per cent, or around 440,000 people, currently hold gadget insurance.

Of those who do hold insurance, the Central Bank found that some may be paying for cover they don’t need. Some 21 per cent of those surveyed failed to cancel previous policies after taking out a new one.

The lack of understanding surrounding the purchase of gadget insurance is perhaps explained by the finding that most consumers never planned on buying gadget insurance until it was sold to them as an add-on when they were paying for another item.

Most of those purchases were based on verbal explanations from retail staff and trust in the provider selling the insurance and because of its low cost and low risk, for the most part, consumers didn’t shop around.

In the Central Bank’s survey, iPhones were the most insured gadget, with 35 per cent holding insurance for their Apple phones, while 22 per cent of adults held insurance for other smartphones.

Another key finding suggests that a majority of purchasers were “distracted by their enthusiasm for the new gadget being bought, and it became quite easy for the sales assistant to bundle in insurance with their purchase in this context”.

The Central Bank’s director general of financial conduct, Derville Rowland, said: “The firms who develop and sell these insurance policies have a regulatory responsibility to ensure that the products are properly designed to meet the needs of the consumers they are sold to, and that they are sold in a fair and transparent manner.

“Given the research also highlighted misunderstanding of policy cover, consumers who may be considering purchasing gadget insurance over the festive period may wish to consider the types of exclusions and excesses highlighted in this research, to see if they are included in their policy, and to determine if the cover they are offered meets their needs.”

Findings from is research are being used to inform the direction of a Central Bank thematic review of add-on insurance, which is currently underway.