Singapore-based group proposed overthrowing entire board of its rival chipmaker 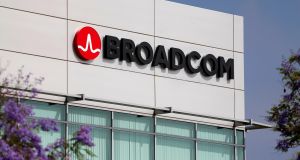 In a statement on Monday, Qualcomm said Broadcom’s nominees are “inherently conflicted given Broadcom’s desire to acquire Qualcomm in a manner that dramatically undervalues” the chipmaker. Photograph: Reuters

Broadcom turned its $130 billion (€110 billion) takeover offer for Qualcomm into a full-blown hostile bid on Monday after it proposed overthrowing the entire board of its rival chipmaker in an effort to win the biggest technology deal in history.

The Singapore-based group presented a new slate of 11 directors to replace the entire board of the world’s largest maker of smartphone chips, putting in motion what is likely to be a heated proxy fight.

Broadcom’s move comes after the board of Qualcomm rejected its $70 (€59)-a-share offer – of which $60 (€50) is in cash – saying it undervalues its business and presents “significant regulatory uncertainty”.

Winning a hostile takeover battle requires several stars to align. Changing the target’s entire slate of directors is a necessary condition but not the only one. Satisfying shareholder concerns on price and regulatory risks is also needed. Since 2010, 57 per cent of global hostile takeover approaches have failed, according to Dealogic.

In a statement on Monday, Qualcomm said Broadcom’s nominees are “inherently conflicted given Broadcom’s desire to acquire Qualcomm in a manner that dramatically undervalues” the chipmaker.

“No company in the industry is better positioned than Qualcomm in mobile, IoT, automotive, edge computing and networking and to lead the transition to 5G” wireless technology, said Tom Horton, Qualcomm’s presiding director.

The San Diego-based company is set to argue that it has a strong and fresh board comprising technical, operational and investment experience, whose members have an average tenure below the average for S&P 500 companies, in part due to the addition of three directors at the instigation of activist investor Jana Partners in 2015.

Broadcom said earlier on Monday that it plans to nominate nine men and two women to be Qualcomm directors at the target company’s annual meeting on March 6th, 2018.

It added that it supports the reappointment of Mark McLaughlin, Anthony Vinciquerra and Jeffrey Henderson – the Qualcomm directors backed by Jana – and would seek to enlarge the size of the board to accommodate them.

“The nominations give Qualcomm stockholders an opportunity to voice their disappointment with Qualcomm’s directors and their refusal to engage in discussions with us,” said Hock Tan, Broadcom chief executive.

A deal, which would be the latest in a wave of consolidation in the chipmaking industry, would create a semiconductor juggernaut that would position the combined company as a market leader in everything from the production of chips for mobile phones to new generation electric vehicles.

Qualcomm, which remains vehemently opposed to a deal, had been courting its shareholders in recent weeks to gain their backing in the expected proxy fight.

People close to Qualcomm’s management have dismissed Broadcom’s takeover approach as an opportunistic attempt to capitalise on its current weaknesses. Qualcomm has been in a protracted legal fight with a major customer, Apple, over a number of issues and has been struggling to close its $39 billion (€33 billion) takeover of rival NXP Semiconductors.

Qualcomm believes that once it settles these matters it will be able to grow at a faster pace. It also believes that it already stands in a position to benefit significantly from the introduction of 5G, a wireless standard that will connect a much wider range of devices.

These factors, Qualcomm has argued in recent weeks, will help lift the stock value of the chipmaker, which at about $65 (€55) per share is lagging behind Broadcom’s offer.

Several large investors in Qualcomm have expressed their opposition to the current offer but would be open to a higher bid, according to people with direct knowledge of the matter.