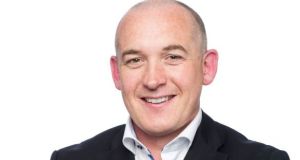 Integrity chief executive Eoin Goulding: “I’m trying to use Brexit to my advantage,” he said. “Change creates opportunity in the market place.”

Dublin-headquartered IT security firm, Integrity 360, has acquired a UK company for an undisclosed sum.

The acquisition of Metadigm increases the company’s UK workforce by 10 to complement its 175 employees in Sandyford, who run its security operations centre.

Integrity 360 offers a range of IT security services and has clients including banks, retail outlets and semi-state companies. This latest acquisition is part of the company’s plan to “significantly increase” its penetration of the UK market.

Established in 2005 as Integrity Solutions, the company reported year-on-year turnover growth of 53 per cent last year, to €37.5 million. Metadigm, meanwhile, is forecast to report turnover of £3 million (€3.4 million) this year.

Speaking to The Irish Times, Integrity chief executive Eoin Goulding said the company is looking at another UK acquisition which he expects will take place in the second quarter of next year.

“I’m trying to use Brexit to my advantage,” he said. “Change creates opportunity in the market place.”

He added that funding for the acquisitions is coming from existing capital, and noted the company had cash reserves of €10 million. Integrity 360 could also avail of debt facilities to fund its future growth, Mr Goulding noted.

As for the Metadigm acquisition, Mr Goulding said: “It’s fantastic to be integrating Metadigm’s expertise into our overall business, reinforcing our growth strategy and introducing a further skillset into our Irish clients. I am delighted to announce the acquisition.”

Aside from its London and Dublin bases, the company has offices in Birmingham and New York and is currently in the process of hiring for 150 jobs to be filled by the end of 2018.