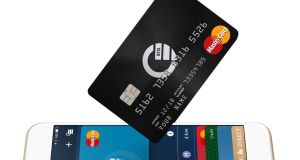 More than 100,000 people signed up during Curve’s beta testing phase for its platform, spending over £100 million in more than 100 countries

Curve, a fintech start-up whose backers include Santander, Investec and the co-founders of TransferWise and Betfair, has launched its new app in Ireland.

The London-based ‘connected finance’ firm, which was founded in 2015, is behind a new app that simplifies personal finance management by consolidating various bank accounts to just one card and a secure mobile app.

Given that Curve estimates users typically carry up to eight bank cards with them at any one time, the attraction of its platform is obvious. The Curve card works just like a normal bank card, anywhere in the world that accepts Mastercard. New customers can download the app, securely add their existing cards, and start spending from all their accounts. Users set a default spending card and change it any time with a swipe in the app.

In 2017 the company secured $10 million in a Series A round to bring total funding to date to $13 million. Other backers of the company include Oxford Capital, SpeedInvest, Seed Invest and former senior executives from Deutsche Bank, Credit Suisse, Paypal and Groupon.

More than 100,000 people signed up during Curve’s beta testing phase for its platform, spending over £100 million in more than 100 countries. The app has now officially launched in Ireland and the UK with a waitlist of 50,000 people looking to sign-up.

“Most consumers want the benefits of using multiple banks, cards and services, so they can make the most of their money”, says Shachar Bialick, founder and chief of Curve. “But managing it all and keeping on top of your spend isn’t easy. Now, it’s as simple as downloading the Curve app and getting started - with one card for all your spending, and one app to help you stay on track. It’s like having a ‘mission control for money’, in your pocket.”

Curve is currently free to use, with the premium Curve Black card, which offers additional benefits, available to order for £50 (€56.40).