Public suggested nearly 1,000 individuals from the world of science for the banknote 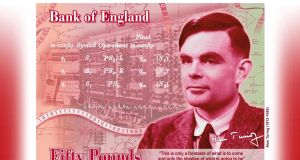 Alan Turing, a second World War code-breaker, has been chosen as the new face of the British £50 note as the Bank of England celebrates Britain’s scientific achievements.

Mark Carney, the bank’s governor, announced the news at the Science and Industry Museum in Manchester. The museum houses the first computer to run a stored programme, which was designed by Turing when he worked at Manchester university.

Turing went on to crack the German Enigma code with a team at Bletchley Park. The discovery saved countless lives during the second World War and was celebrated in the film The Imitation Game.

The £50 note, which will be made from polymer rather than paper, like the £5 and £10 notes, is the latest recognition for a man who died as a pariah because of his homosexuality. Turing was convicted of gross indecency for his relationship with a man, but was posthumously pardoned by the queen. He died from exposure to a poison, but experts differ over whether he killed himself or died by accident.

Mr Carney revealed the design of the reverse of the note, which will enter circulation in 2021. It features a photograph of Turing, some of his mathematical formulas and a technical drawing of his Bombe code-breaking machine.

Other characters shortlisted to appear on the note included Mary Anning, a palaeontologist, Ada Lovelace and Charles Babbage, also computing pioneers, Ernest Rutherford, who split the atom in Manchester, and Stephen Hawking.

Sarah John, chief cashier of the Bank of England, said: “The strength of the shortlist is testament to the UK’s incredible scientific contribution. The breadth of individuals and achievements reflects the huge range of nominations we received for this note, and I would like to thank the public for all their suggestions of scientists we could celebrate.”

The bank has involved the public in nominations for figures to put on notes after complaints about the lack of women. Jane Austen is to be the face of the £10 note.