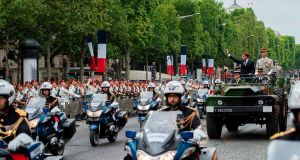 The famous boulevard was reopened to traffic as soon as the parade finished, but a few hundred protesters from the grassroots gilet jeune or yellow vests movement tried to occupy it.

Macron and his guests had already left for the Elysees presidential palace for lunch. France’s BFM television showed images of police firing tear gas to disperse the protesters, some hooded and trying to block the road with metal barricades, dustbins and other debris.

Several loud bangs could be heard. Protesters hurled objects at the police, booed and set bins on fire. Police drove some of the demonstrators to adjacent streets where they regrouped and set up new barricades, drawing more tear gas fire.

The Police Prefecture said on Twitter it had ordered the protesters to leave the area, or be forcibly removed. The number of gilet jeune protesters has dwindled to a few hundred over the past weeks from a high of about 300,000 nationwide in November when demonstrations started against fuel price hikes and later morphed into a general discontent against Macron’s policies and government.

Paris authorities had banned all gilet jeune demonstrations near the parade and so few of the protesters wore the high-visibility jackets that give their movement its name.

But several groups linked to the grassroots movement had called for gatherings around the Champs Elysees on Bastille Day, a national holiday in France. And earlier a French police source and a court source said 152 protesters – whom they linked to the gilet jeune movement – had been detained near the Champs Elysees as they tried to stage a protest.

This year’s parade showcased European military co-operation and innovation, complete with a French inventor hovering above Paris on a jet-powered flyboard.

Former jetskiing champion and military reservist Franky Zapata clutched a rifle as he soared above the Champs-Elysees on his futuristic machine, which the French military has helped to develop. The board, which was first created to fly above water, can reach speeds of up to 190km/h and can run for 10 minutes.

Macron, flanked by German chancellor Angela Merkel and other European leaders, nodded in approval and applauded Zapata (40), who was referred to by astonished French TV commentators as “James Bond”.

The French armed forces minister, Florence Parly, said before the parade that the flyboard could “allow tests for different kinds of uses, for example as a flying logistical platform or, indeed, as an assault platform”.

Macron had invited Merkel and other leaders to the parade as part of his drive for deeper European defence co-operation. “Never, since the end of the second World War, has Europe been so important,” the French president said.

But as Macron opened the parade by being driven down the Champs-Elysees in an open-topped military vehicle, waving to a flag-carrying crowd, a few gilets jaunes anti-government protesters, who had mingled with onlookers despite tight security, inflated yellow balloons and booed the president.

Two key figures from the gilets jaunes movement – which has held weekly protests for more than seven months – were arrested near the parade route in the morning.

The parade’s focus on European military co-operation meant it included troops and hardware from several European nations, including British Chinook helicopters. Paris has stressed that British-French defence co-operation will remain tight even as Brexit looms.

But while the departing British prime minister, Theresa May, was expected to attend, she did not and the UK was represented by the senior cabinet minister David Lidington. – Guardian service