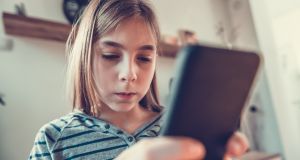 More than one in 10 children aged eight to 13 are spending the equivalent of 61 days a year online, new figures show.

A survey by CyberSafeIreland, a children’s internet safety charity, found that 12 per cent of eight-year-olds are spending more than four hours online each day and this rises to 15 per cent among 12-year-olds.

It also found that of 3,867 children surveyed over the last academic year, 92 per cent owned their own smart device.

And a high proportion of boys, including 36 per cent of eight-year-old boys and 43 per cent of 10-year-old boys, are playing over-18s games and being exposed to violent and sexual content that is not appropriate for their age.

While technology undoubtedly brings social and educational benefits, it is vital that screen time is monitored and that it is balanced appropriately

Snapchat remains the most popular social media app with this age group, followed by WhatsApp, Instagram and Tiktok.

The findings were included in the charity’s annual report, which was due to be launched on Tuesday by Minister of State for Higher Education Mary Mitchell O’Connor.

Ms Mitchell O’Connor said she and the Government were “keen” to hear the contribution from CyberSafeIreland.

“I’ve seen first-hand how beneficial technology can be in the field of learning, but it is not without risks,” she said. “I will be endeavouring to ensure that the issues raised in their annual report get the attention they deserve from the various Government departments involved.”

Philip Arneill, CyberSafeIreland’s head of education and innovation, described the findings as astonishing.

“While technology undoubtedly brings social and educational benefits, it is vital that screen time is monitored and that it is balanced appropriately with all the other aspects that contribute to a healthy lifestyle,” Mr Arneill said.

“It is imperative that parents and teachers are able to equip children with all the relevant skills to keep themselves safe given the many risks that they face.”

The charity has called on the Government to establish a long-term strategy that includes strong and effective measures on education, public awareness and regulation to ensure children are protected online.