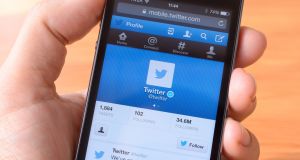 Twitter announced Thursday that it would hide messages from major political figures who break the company’s rules for harassment or abuse behind a warning label, but would not take the messages down, in a move that could heighten the debate over political bias on the service.

The warning labels will explain to viewers that the tweet in question breaks Twitter’s rules against harassment and violent threats. Twitter users can click through the warning to see the message. Tweets affected by the new measure will remain on the site, but will not appear in searches or be recommended to users through any of Twitter’s algorithmic channels. When they do appear in a user’s timeline, they will be hidden behind an interstitial reading: “The Twitter Rules about abusive behavior apply to this Tweet.”

The labeled messages will not be removed from the service, the company said, because they are a matter of public interest. “In the past, we’ve allowed certain Tweets that violated our rules to remain on Twitter because they were in the public’s interest, but it wasn’t clear when and how we made those determinations,” Twitter said in a blog post announcing the warning labels. “There are certain cases where it may be in the public’s interest to have access to certain Tweets, even if they would otherwise be in violation of our rules.”

Twitter’s announcement comes as many tech companies, including Facebook and Google, which operates YouTube, have struggled to balance free speech with their own policies against hateful and offensive content. Facebook is in the process of establishing an independent oversight board to review its decisions on content moderation.

YouTube this month banned videos that promote white supremacy and neo-Nazism, after users expressed outrage that such content was easily accessible. But the company opted to keep up videos by a prominent conservative creator in which he used homophobic slurs to describe a journalist. YouTube called the videos “offensive” but ruled that they did not violate its policies.

Twitter’s move is the company’s latest attempt to manage inflammatory tweets while trying to avoid accusations of favoring one political side over another. Some critics say the company has allowed politicians, including US president Donald Trump, to post messages that break the company’s terms of service. Mr Trump, who has nearly 62 million followers on the platform, has used Twitter to threaten nuclear war with North Korea and to post a video that portrayed violence toward a news outlet.

But Mr Trump, and many other conservatives, regularly complain that Twitter limits their reach on the service. They say that Twitter is biased against conservative users, an accusation that Twitter has repeatedly denied. Other world leaders, including president Jair Bolsonaro of Brazil and Ayatollah Ali Khamenei of Iran, have used Twitter to share content that would typically be removed by Twitter if it were posted by average users. In March, Mr Bolsonaro tweeted a pornographic video to denounce Sao Paulo’s Carnaval festival, while Mr Khamenei frequently uses his Twitter account to call for Israel to be “eradicated.”

Employees from Twitter’s policy and legal teams decide when to apply the warning label to a tweet, and they will also seek input from employees in regional teams who can provide context about the political climate in the countries where they work, a Twitter spokeswoman said.

In addition to burying abusive tweets behind a warning label, Twitter said that it would not promote those tweets, removing them from its search feature, push notifications and other promotional tools. – New York Times and Guardian