Freedom of expression ‘does not include freedom to broadcast mass murder’ 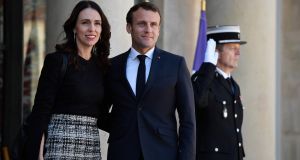 The appeal was made exactly two months after a white supremacist from Australia massacred 51 people in two mosques in Christchurch, New Zealand.

The killer broadcast the atrocity on Facebook Live for 17 minutes. “Original footage of the live stream was viewed some 4,000 times before being removed from Facebook,” Ms Ardern wrote in an opinion piece in the New York Times. “Within the first 24 hours, 1.5 million copies of the video had been taken down from the platform. There was one upload per second to You Tube in the first 24 hours.”

The atrocity can still be viewed on some far-right websites.

Ms Ardern said 8,000 people in New Zealand contacted mental health hotlines in the aftermath of the attack. Many – including the prime minister – saw the video autoplay on their social media feeds without realising what it was.

The call to action asks governments and private corporations to prevent the posting of terrorist content online, to remove it quickly when it does appear and to prevent the use of live-streaming to broadcast violence.

The appeal grew out of a telephone conversation between Mr Macron and Ms Ardern on March 29th. Leaders from nine countries were in Paris to endorse it, including Taoiseach Leo Varadkar. King Abdullah represented Jordan, which lost citizens in the massacre. Canada, Indonesia, Norway and the UK were also parties to the text.

The absence of the US government was glaring. The US reportedly refused requests from New Zealand to sign up.

Facebook has resisted pressure since the attack to shut down its live feed. It was represented at the Élysée by the former British politician Nick Clegg, who is vice president in charge of communication for Facebook, Instagram and WhatsApp.

Facebook headquarters in San Francisco announced overnight on Tuesday that it will temporarily ban users who break certain rules in broadcasting content. Repeat offenders could be barred permanently from the website. The company employs thousands of employees to remove objectionable content, and said it was advancing in the use of artificial intelligence to identify such content.

Facebook chief executive Mark Zuckerberg did not attend the summit because of a scheduling conflict. He called Mr Macron on May 10th.

Ms Ardern told Le Monde she had spoken to Mr Zuckerberg by telephone on May 11th. “We have had constant exchanges with Facebook since March 15th,” the New Zealand leader said. “They understand our desire to make long-term changes, and they have committed to this path in good faith. Of course, the presence of Mark Zuckerberg would have been important.”

Ms Ardern said she limited the appeal to violent extremism in the hope of reaching the greatest possible consensus. A statement on hate speech would have led to a debate over freedom of expression, she said.

Freedom of expression “does not include the freedom to broadcast mass murder,” Ms Ardern wrote in the New York Times.

A draft law in France requires that hate speech be removed from the web within 24 hours. In Paris last week, Mr Zuckerberg said he was against that provision.

Ms Ardern has won praise for her deft handling of the crisis. “Tragic events often reveal exceptional personalities,” the commentator Pierre Haski said on France Inter radio. “Not only did she show the compassion that her country needed and have certain automatic weapons banned. She launched a crusade against the other type of violence used by the Australian terrorist: social networks.”

The fight against terrorism on the internet has long been a priority of Mr Macron, an adviser said. In June 2017, following attacks in Manchester and London, Mr Macron and British prime minister Theresa May adopted a joint plan for that purpose.

The Christchurch appeal was launched on the sidelines of France’s second annual Tech for Good week, established by Mr Macron with the objective of engaging digital companies on behalf of the common good. The heads of state and government who endorsed the appeal dined with the heads of more than 80 leading technology companies on Wednesday night.

1 Revenue publishes list of companies tapping State for wage support
2 How long can Government afford to keep State pension age at 66?
3 Trump vs Biden: Stakes are high for the Irish economy
4 107 jobs at risk as Broderick’s shareholder considers examinership
5 Will remote working become the norm?
Real news has value SUBSCRIBE