Ganley firm behind US telecoms plan backed by Bush ally 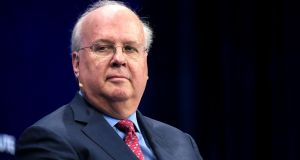 Galway businessman Declan Ganley’s Rivada Networks is behind a plan for the US telecoms sector that is being promoted by former White House deputy chief of staff Karl Rove.

Mr Rove, who served under US president George W Bush, is acting as an adviser to Rivada while another senior Republican, former Speaker of the House of Representatives Newt Gingrich, “has broadly been supporting the [Rivada] concept”, Mr Ganley said.

Mr Gingrich’s involvement comes against a backdrop of moves by President Donald Trump to restrict the influence of Huawei in the US technology sector.

Mr Ganley said the Rivada proposal was “not a Republican thing” and pointed out that the directors on the US company’s board include Martin O’Malley, a Democrat and former governor of Maryland.

Other members of the board include Jeb Bush, brother of George W, Gen Richard P Myers, a former chairman of the US joint chiefs of staff, and a number of former senior officials from the US department of homeland security.

The Rivada proposal involves the use of bandwidth currently controlled by the US department of defence to provide “wholesale” access to 5G in a way that would, Rivada says, lower prices.

Mr Ganley said this would in turn undermine the advantage that has been developed by Chinese companies, who have been receiving very substantial backing from their government.

He said the way services are currently being provided has opened up large opportunities for Beijing to get its equipment into the “cardiovascular system of the cyber domain”.

Mr Ganley said the potential role to be played by Huawei in western infrastructure is a hot topic globally and has created controversy in the UK and Australia as well as in the US.

“It is about the cyber domain for the rest of this century. Are we going to let the organs of the Communist Party of China have any control over it?”

Mr Ganley and Rivada made a recent submission to the Irish National Cyber Security public consultation programme, in which it recommended that a centrally co-ordinated cyber security agency be created.

The communications systems of the future will be uniquely vulnerable, and reachable by any single actor with a laptop located anywhere on the planet, the submission said.

“Threats could come from individuals with a grudge or nation-state actors pursuing their own interests.”

Mr Ganley is currently suing Ireland in relation to the operation of the State’s 1995 mobile phone licence competition, in which he was part of a consortium that failed to win the licence.

He is also suing businessman Denis O’Brien, whose consortium won the licence, and the then communications minister, Independent deputy Michael Lowry.