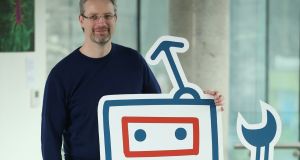 Webio’s Paul Sweeney predicts businesses will soon have to get more conversational with those using their products or services.

Retailers and service providers will increasingly turn to artificial intelligence to help them engage better with customers to try to anticipate and meet their every need.

That is according to Paul Sweeney, co-founder of ConverCon, the world’s first conference dedicated to the opportunities and challenges arising from the move to conversational interfaces.

Mr Sweeney, who is also executive vice-president of product at Webio, a Dublin-based start-up that uses AI to streamline inbound and outbound customer communications, predicted that businesses would soon have to get more conversational with those using their products or services.

“As more consumers turn to messaging apps such as WhatsApp and widespread adoption of voice-activated platforms like Alexa takes place, businesses need to be able to engage them in a manner that pre-empts their needs,” said Mr Sweeney.

He was speaking shortly after Webio, which develops chatbots that use AI to assist in making quick decisions based on customer responses, announced a new collaboration with Limerick-headquartered Avvio.

The two companies have teamed up to introduce a new conversational messaging hotel-booking bot known as Dorothy, that lets customers find, book, pay and start planning their stay.

The bot has been designed for the Fota Collection, which runs the five-star Fota Island resort and the four-star Kingsley hotel, both in Co Cork.

Dorothy enables users to check room availability, book and pay for it, and it is planned users will soon be able to to make dinner reservations and book spa treatments as well. It will initially be available through Facebook Messenger but can also be configured for other platforms as well.

Mr Sweeney said 45 trillion messages are now being sent via messaging platforms with more than 60 billion messages sent per day over Facebook Messenger and WhatsApp alone. This he said showed the move to messaging was afoot with “big consequences” for retailer and service providers.

He added that widespread adoption of voice devices was also nearing with 75 per cent of US households expected to have a voice device in their home within two years, according to Gartner research.

“There are both opportunities and challenges coming from all of this. Two billion messages are sent between customers and companies and being able to turn messages into conversations will pay dividends,” said Mr Sweeney.

Webio was established by Graham Brierton in 2016. It was recently selected to take part in the prestigious Blackbox Connect accelerator programme in Silicon Valley, California.

The start-up, which recently secured €2.25 million in funding from investors including Silicon Valley-based Cameo Global and Enterprise Ireland to help further develop its platform, has grown at a rate of 30 per cent month-on-month over the last year.