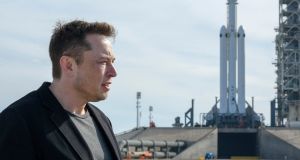 Elon Musk, founder of SpaceX, with the company’s Falcon Heavy rocket: the firm will on Saturday officially enter the race to bring internet access to all parts of the earth’s surface with the planned launch of its first test satellites for a globe-encompassing communications network

SpaceX will on Saturday officially enter the race to bring internet access to all parts of the earth’s surface with the planned launch of its first test satellites for a globe-encompassing communications network.

The latest trial from Elon Musk’s private space company is a world away from last week’s spectacular first launch of Falcon Heavy, the world’s biggest rocket. Undertaken with none of the Tesla chief executive’s usual showman flair - he has not even mentioned it on Twitter - it is an early technical trial for a communications service that could be years from completion.

If successful, however, SpaceX has said it plans to start launching its first commercial satellites next year, with a constellation of more than 11,000 circling the earth in low-earth orbit by the time the network is complete in 2024.

The satellite trial points to an impending space race that has drawn in powerful backers. Google, which once looked at developing its own satellite-based network, became one of SpaceX’s biggest backers when it led a $1 billion investment round three years ago. Meanwhile, SoftBank and Richard Branson are among the backers of OneWeb, a European rival that hopes to start providing broadband internet next year.

SpaceX’s application for approval to test a satellite internet service from the Federal Communications Commission (FCC) is one of 12 made to the US regulators, highlighting the extent of the potential competition.

Mr Musk’s company began work on its own satellite plans in 2014 but has played down the urgency of the project as it has focused on its more immediate goals of improving the performance of its main Falcon 9 rocket and getting the long-delayed Falcon Heavy off the ground.

The trial involves placing two small satellites in orbit to test communications links to a number of ground stations, including the headquarters of Tesla. The need to deliver high-speed data to driverless cars is among the applications predicted for high-speed 5G wireless networks. SpaceX plans to connect its constellation of satellites to form a so-called mesh network, passing information among them and blanketing the earth.

The spate of satellite competitors points to an expected explosion in the amount of data that will soon be flowing over the world’s communications networks.

“In the future, there’s going to be insatiable demand - that’s the big promise of 5G,” said Chuck Robbins, chairman and chief executive of Cisco. He said it was too early to predict how many rival space-based networks this would support.

The economics for satellite communications have improved considerably since the turn of the century, when a spate of ambitious projects ended in financial collapse, choking off the flow of investment into the industry.

“The bankruptcies of Globalstar and Iridium shut everyone off,” said Robert Twiggs, one of the inventors of CubeSats, a new generation of low-cost satellites that have since helped bring down the cost of operating in space.

Small satellites placed in low orbits around the earth have so far been used to photograph the planet in minute detail, bringing down the cost of space-based imagery for industries such as agriculture and energy. Their use in communications networks has yet to be demonstrated. However, their closeness to earth means they should escape the kind of communication delays of satellites in higher orbits.

Rival technologies could end up duplicating the coverage of the new satellite networks at lower cost. Google at one point considered having its own satellite network, before stepping back and focusing on developing high-altitude balloons to provide internet access. Facebook, meanwhile, is trying to perfect high-flying drones, using links to communications satellites to connect them to wider networks.

SpaceX’s satellite plan won the personal backing this week of Ajit Pai, chairman of the FCC, who called on other members of the commission to support the company’s application for a communications licence.

It would be the first US-based company to receive a licence, following OneWeb, Space Norway and Canadian satellite company Telesat. By supporting the SpaceX plan, the FCC would “unleash the power of satellite constellations to provide high-speed internet to rural Americans”, Mr Pai said.