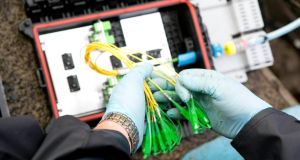 The Government’s broadband procurement process is fundamentally flawed and will lead to delays and higher costs for the taxpayer, Eir warned the Minister for Communications before quitting the scheme last month.

In a letter to Denis Naughten seen by The Irish Times, the chief executive of the State’s largest telco, Richard Moat, said it was leaving the process because of “repeatedly highlighted” commercial, regulatory and governance issues.

“We strongly believe that the National Broadband Plan framework, as well as being incapable of acceptance by Eir, will drive very substantial additional subsidy costs and delays to the rollout of high-speed broadband to rural Ireland, ” he wrote.

The State-subsidised scheme to provide 542,000 rural households and businesses with high-speed broadband, which was first announced in 2012, has been beset with problems and delays because of the complexity of the procurement process and difficulties establishing the exact number of premises to be covered.

Eir’s surprise decision to pull out just months before the scheme was set to begin, leaving just one bidder in the race, has added further uncertainty. Opposition parties have accused the Government of presiding over a major policy failure.

In his letter Mr Moat said the company quit after spending 30 months and €7 million on its bid because the scheme would have generated “an uneconomic return”. He said key factors were the Government’s stipulations that funding for the project be ring-fenced, that Eir create a separate wholesale division for the scheme, and that its existing wholesale division, Open Eir, be restricted from operating in scheme areas.

Mr Moat also highlighted concern at a National Broadband Plan proposal to make Eir charge less for access to its poles and ducts, with a significant impact on the State subsidy required, as the contract winner will most likely have to use Eir’s infrastructure to reach homes in the intervention area.

In the letter, which was released as part of a batch of correspondence between the company and the Minister under the Freedom of Information Act, Mr Moat also claimed that Eir could provide high-speed rural broadband “for a fraction of the proposed subsidy, using the methodology of our 300k rollout”.

The Government’s controversial decision last year to allow Eir effectively to move 300,000 homes from the original National Broadband Plan to its own commercial roll-out prompted Siro, the joint venture between ESB and Vodafone, to quit the scheme amid allegations that the move had impaired the tendering process.

The high cost of connecting homes in very rural parts of the State is likely to make the scheme cost more than the €1 billion previously signalled. The State subsidy required is a matter for the department’s negotiations with the sole remaining bidder, the Enet-SSE consortium, but is expected to be between 30 and 50 per cent of the overall cost, or about €500 million.

1 Irish designer of Oxford vaccine: ‘I’ve never worked so hard in my life’
2 BOI customers to be charged twice with bank fees on New Year’s Eve
3 We continue to ignore massive pensions elephant in the room
4 Family who founded Ina’s Kitchen Desserts ask court to appoint examiner
5 Being polite in work emails is more important than ever
Real news has value SUBSCRIBE