Buying a new smartphone? We compare the big three 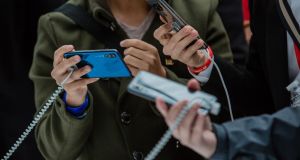 It’s difficult to know which smartphone you should invest in. While some people will never stray from Apple or Android, there are plenty out there who aren’t as hooked into one platform and could be persuaded to make a change.

Most of the flagship smartphones are now at a standard where they are almost matched in quality across the board. But there are some details worth teasing out, particularly when you consider the price of a new smartphone these days. It isn’t cheap, so choose wisely.

This is going to be an intensely personal choice. The iPhone X takes a bit of a nostalgic look at the original iPhone, updated for this decade. The notch - the small section on the screen for the selfie camera – controversial as it was at the beginning, doesn’t seem to be a problem for many users, and the display is beautifully detailed. The Huawei P20 Pro is definitely inspired by the iPhone X, as one look will tell you, but it has taken it in a slightly different direction with the gradient colours. And the Samsung Galaxy S9+ has gone for as much screen as it could possibly jam into the frame, with the edge-to-edge display that tapers off gently at the sides.

But let’s face it, no matter which one you choose, the first thing you’ll do is put it into a phone case to protect it from being shattered or scratched, so that lovely design will be hidden regardless. There’s something to like about each of these phones, so we’re calling this one a tie.

The camera is the killer app for smartphones these days, and companies are putting large amounts of money into developing the best cameras they can. But as Irish Times photographer Bryan O’Brien told me in this month’s Irish Times Technology and Innovation podcast, it’s not all about the megapixels. Mind you, O’Brien also maintains that you don’t need to buy the latest and greatest phone to get a decent camera, as his own experience bears out, so perhaps you might want to reconsider your decision to buy a new smartphone altogether.

But if you are in the market for a new phone, and the camera is an area you want to focus on, which of the three smartphones tested here has the best camera?

It’s a close run competition. The iPhone X has an excellent camera both front and rear, bringing some of the new technology created for the iPhone 7 Plus to help you get better portrait shots now transplanted to the front-facing camera. Not only does that give you Face ID, where your phone uses 3D scans of your face to create a biometric key to unlock your handset, but it also means you get the portrait mode for selfies.

The Galaxy S9+, meanwhile, also has an excellent rear-facing camera, with everything from a super slo-mo mode to an intelligent assistant drafted in to turn the camera into an on-the-go translator. The company has been turning out decent cameras for a long time, and the S9+ is no exception. The dual set up produces some stunning, detailed images.

But the Huawei P20 Pro is possibly one of the best cameras I’ve seen on a smartphone. The night mode in particular is amazing – it took a photograph in a very dimly lit room and picked out all the detail, turning it to almost daylight. There are some issues: skin tones can look a little chalky in these super low light photographs, and if your subject moves, things can get a bit soft around the edges. But for the most part, the results are breathtaking. That’s down to the larger sensor that Huawei has put into the phone, plus a wide aperture that allows more light to get to the sensor to start with. The P20 Pro has upped the game to three cameras, compared with the two in the iPhone and S9+, so you get a 40 megapixel lens with a f1.8 aperture, a 20 megapixel black and white lens with f1.6, and an 8 megapixel telephoto lens with f2.4. But as O’Brien said, don’t be dazzled by megapixels. What really matters is how they combine to get you closer to your subject and to get more detail in your images.

Some of it is down to software, with an AI mode that helps choose the best settings for your photograph. A picture I took on a sunny day in Dublin (remember those few days?) saw the camera pick out the blue sky and enhance it. If you don’t like that, you can turn it off in the settings, with little negative impact on picture quality that I could see.

Verdict: Huawei P20 Pro night mode puts it above the others, but the Apple iPhone X and the Samsung Galaxy S9+ are worthy contenders.

If I had a euro for every complaint I’ve heard about smartphone batteries and their inadequacy, I would probably have enough to buy all of these handsets outright. Sim-free. Every time a new smartphone is released, the battery appears to have been improved, but the truth is we are doing so much more and asking so much of the batteries with bigger, more power-hungry screens that it’s not surprising they inevitably fail to meet our high expectations.

Having said that, I consistently get most of a day out of the iPhone X, and I would class myself as a heavy user. The low battery mode kicks in at 20 per cent and ekes out a bit more power from the 3,000 mAh battery.

The Samsung S9+ has also made some strides in battery capacity, with a 3,500 mAh battery in there. Samsung has expended significant resources in this area in recent years, making sure the Note 7 debacle isn’t repeated. Again, close to a day was the norm for this phone rather than the exception.

The P20 Pro has gone for the 4,000 mAh battery, which is probably needed given the size of the display and the camera it has packed in. After a couple of weeks, I was still getting more than a day out of it, and that was with heavy camera use too.

When Huawei released the Emotion UI, I was less than enthusiastic. It just seemed a little gaudy, a little childish. But over the years it has settled down and now it is hard to find fault when it is up against its Android rivals.

Likewise, Samsung’s version of Android works, although it could do without some of the extras you are forced to endure.

The one other thing that both phones have in common? The update schedules are decided by the manufacturer rather than Google. If an update for Android is pushed out, you have to wait for your handset maker to decide when – or in some cases, if – your phone is going to get it. When you consider the number of manufacturers using Android, it makes sense that this is how it is controlled, but it doesn’t mean it’s not frustrating.

On the other hand, iOS works. Updates are pushed out at the same time, and while they haven’t always been perfect releases, at least you have an idea of the schedule.

Add in the fact that iOS, for the most part, is reasonably straightforward and the App Store is easy to find your way around if you want to download extras for your phone, and Apple has definitely got the edge in the software stakes. On the downside, you can only install Apple-approved software, unless you jailbreak your phone, unlike Android where a single security setting is all that stands between you and some outside-market apps. That is both a positive and a negative though, as some of these unofficial apps – and official in some cases – can contain malware. So proceed at your own risk.

Winner: Apple’s iOS may not be perfect, but it’s a little more straightforward when it comes to updates.

It’s a sad day when a headphone jack is considered an extra, but this is where we are these days. The iPhone ditched the headphone jack from the iPhone 7 onwards, and the P20 Pro has followed that lead. The only one hanging on is the Samsung S9+. While I haven’t found the lack of a headphone jack as irritating as I thought I would – or found it in the early days – there are certainly times when it would have been nice to just plug in headphones rather than relying on Bluetooth. Mainly because I keep forgetting to charge the Bluetooth ones.

All three phones are water resistant, which is as it should be.

Winner: The S9+ is still clinging on to the old ways, and for that, we salute you, Samsung.

If you are a hardened Android fan or wavering from Apple, the Huawei P20 Pro is a worthy contender for your cash. It is less expensive than both the iPhone X and the Galaxy S9+, and while price isn’t everything, the camera pushes it ahead of both rivals – for now. Samsung seriously needs to watch its back on this score.