Cantillon: Customer base is already fuming over proposed takeover of Newsaccess 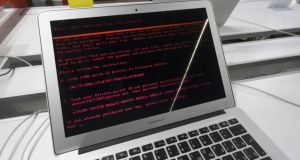 A ransomware demand for the payment of $300 worth of bitcoin sits on the screen of laptop infected by the Petya computer virus. Photograph: Vincent Mundy/Bloomberg

This week’s ransomware IT virus attack, which has spread from Ukraine to affect businesses around the globe, comes at a particularly inauspicious time for Kantar Media, which is trying to get a takeover of its biggest rival in the Irish media monitoring market over the line with regulators.

This at a time when that base is already fuming over the possible effects on service of Kantar’s proposed takeover of Newsaccess, which would give it a thoroughly dominant position in the market.

Most major businesses, State agencies and public relations firms pay for media monitoring. They want to know what journalists and others are saying about them. Companies such as Kantar scan every publication and watch every broadcast, and compile it in reports to send each morning to their client base. It’s not vanity. It is simply brand management.

Between them, Kantar and Newsaccess have almost the entire market in Ireland for these sort of services in print and broadcast (it is much easier to monitor social media). The deal was referred to competition regulators.

It was perhaps unwise, then, of Kantar to almost entirely shut down its Irish office and ship its functions over to London earlier this summer before it got the all clear from regulators for the takeover deal.

Since then, its service to Irish clients has been more than problematic, which Kantar has acknowledged and for which it has apologised. Most of its Irish client base, from government departments to stock market listed companies, now have no viable alternative service.

The Competition and Consumer Protection Commission, which is studying the takeover deal, has fielded many complaints, including from the Public Relations Institute of Ireland. The PRII’s membership is on the verge of wielding pitchforks and torches, things have got so bad.

This week’s ransomware attack, even though it clearly wasn’t WPP’s fault, serves only to highlight the difficulties faced within a market if there is nowhere else for customers to turn. Irish clients of Kantar could be forgiven for considering themselves trapped.

The odds must be rising that the CCPC will force Kantar to divest part of its Irish business to inject more competition and bring service back from the brink.