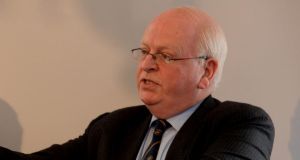 Senator Michael McDowell warned about the prospect of the island of Ireland becoming like the Galapagos islands or the San Andreas fault, sitting on shifting political tectonic plates. Photograph: Cyril Byrne

The big takeaway from Monday’s seminar on Brexit at the Institute of International and European Affairs in Dublin and what might happen over the coming years was clear: nobody really has a clue.

This left some journalists in attendance despairing at the prospect of how negotiations between the British and the Europeans might go in the run-up to the UK’s March 2019 exit from the European Union, not least given how, in the eyes of the panelists, ill-prepared the British political negotiators are.

The predicament facing Northern Ireland is of particular concern with the prospect of the region ending up outside the EU single market and the customs union along with the rest of the UK.

Catherine Day, senior adviser to European Commission president Jean-Claude Juncker, ruled out the prospect of Northern Ireland earning some special status where it might retain links to the customs union. She did not see how this is possible for a non-member state, she said.

If Britain leaves the customs union and agrees a less attractive trade deal with any other part of the world, what rules apply in Northern Ireland, she asked. EU rules or British rules? “It just doesn’t work.”

The former commission secretary-general did, however, suggest lateral thinking on the Border issue to lessen the economic impact of a hard frontier.

“I am not an expert in customs myself so I won’t speculate,” Day opened, slightly undermining her point, “but how and where you do checks is eminently open to flexibility and creative solutions.”

The fears of another panellist at the event, Senator Michael McDowell, the former minister for justice, extended further into the future and lie in Europe. Armed with a recently published book on the collapsed Habsburg empire, McDowell warned about the prospect of the island of Ireland becoming like the Galapagos islands or the San Andreas fault, sitting on shifting political tectonic plates.

If Brexit intensified EU integration and emboldened the federalists in Brussels, it would put “a massive strain on this island” with the two parts going in different directions, he said.

That is “unless Britain is so close to the European Union like Norway or Switzerland that it doesn’t really matter,” he added.

Knowing where the UK will be in two years and beyond is anyone’s guess right now given the tectonic shifts in the Brexit debate, which is raising lots and lots of what-ifs.